If you are consistently facing a QUESTION-ANSWER session held by friends who have chewed your ears off with such queries:

Simple yet easy,  but, yes, we have a solution, and that is, get your coffin nails done to dwell into the most aesthetic vibes of all time.

But, before, read about what this shape is?

What Are Coffin Nails?

Coffin-shaped nails, a merge between ballerina (which is long with slightly sharp squared tips) and stiletto nails (that have pointed ends) style.

How Does A Coffin Nail Look?

This shape is called coffin nails just because its cut resembles the coffin, and the top is squared.

You can also find it similar to the ballerina slipper. In this 21st century, you can’t consider yourself “READY” until or unless your nails are gorgeously done.

What’s The Difference Between Ballerina And Coffin Nails?

The ballerina nail is slightly sleek cut from the outer edges of the nail. However, the coffin nails are also squared cut but broad from the sides.

When it comes to beautifying your natural nails, you always have to pick a style you have never worn before, just like these coffin nails.

How To Shape Coffin Nails?

It won’t be wrong if we say it is the most trendy nails shape of all time. Though shaping it is a chore for some, but we will make it a breeze for you.

How Do You Cut Coffin Nails?

Cut your nails’ sides to some extent and file them using the fastest electric nail filer.

The process should be performed gingerly as the smallest act of ignorance won’t only ruin the shape of your nails but will also harm your finger.

Furthermore, while filing, keep the exact coffin shape in mind and move the blades diligently to taper the nails’ sides.

Tip: These ideas will be proved fruitful only when you take care of them. Thus, to get desired results, use a handy nail dryer once you apply the nail paint and other embellishments.

Let’s do it differently with coffin nails shape by choosing spooky, uncanny, and ghostly designs. Halloween is an event to celebrate all the horrifying feelings and characters.

FYI: Halloween is incomplete without

Acrylic nails are a combination of liquid monomer and a mix of powder that ends becoming a blob of dough, which is further applied and shaped on your nail, and later air-dried.

Acrylic coffin nails are what should be chosen if you want long-term gorgeousness.

However, these nails come at a heavy price, but you can have them for as long as you would love to have. 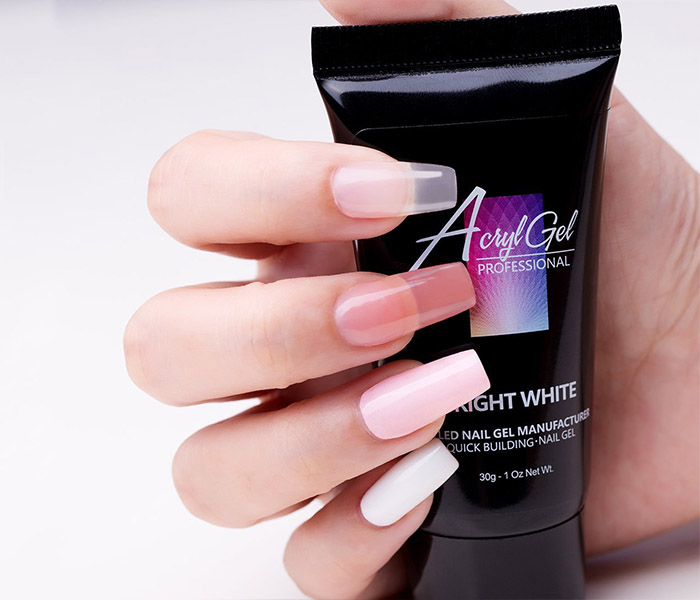 Use a poly gel nail kit in case you are not in favor of applying acrylic nails. This style includes nude colors and feasible application. Not to forget, these fake nails come in a coffin shape.

4. Royal Blue Coffin Nails (Including Ideas Of Shades Of Blue)

What about going with royal blue color that will pull off your hand’s charm? Of course, it must be a big yes.

What Is The Blue Nail Trend On Tiktok?

If you have got blue nail art done, it means you have a boyfriend, or simply, you’re taken. Probably, when girls ask their boyfriends about which nail paint they should apply, the male-lovers always go with the option blue (no matter which shade).

Idea 6 (Blue Hues For You, Blue Coffin Nails With Design):

Shimmers, glitters, and glam are all that girls want in their life when sprucing up the look. So, take your nails’ glory to the next level with this nail art. On coffin nails, the glittery coat looks ravishing.

3d nail art is one of the gifts always admired by college girls. So, why not choose some 3D design and apply it to your lovely nails to stand out among your friends?

Of course, it must be a big yes. On touching, it will give you HYPE you deserve.

Do you love long coffin nails? Then, what are you waiting for? Just check these ideas and go longer (of course, in nails) to follow the fashion trends of 2023.

Put your hands on the ears and ignore the negative remarks coming your way.

BECAUSE!!! Just like tattoos misconception, long length of coffin nails has also faced lots of judgmental comments. In short, people with long nails are assumed to be overcritical.

Idea 5 (Mix Everything In One Look):

In winters, you may need some attractive yet deep colors to beautify your hands. The design ideas we suggest here are as per your thoughts and desires.

It is being said that winters are for a blend of white, black colors with a “Plus Tint.” Not to forget, styling nails in winters is considered the most daring task.

Cute coffin nails, short in size, are perfect for mothers who never want to lose grip on fashion. Also, with short nails, you don’t have to worry about the cracks. So, what a bliss! No?

Go with coffin nails but short in length and look like a diva. Coffin-shaped accent nails are easy to carry on a regular basis.

We all need this, the medium length, and the stylish cut of nails. Bring it on!

Why? Well, it’s a dream of every adult woman to look like a celebrity, and this nail shape makes them look so.

Just check these ideas we have for medium coffin nails and increase your hand movements (definitely to impress the crowd). Beautiful nails are the epitome of a stunning person.

Interesting Tip: Become the queen of fingers on TikTok by wearing popular Tiktok rings in your hands with a coffin nail art done and make a mark on social media.

Idea 3 (A Tone That Matches Your Skin, Coffin Nails Medium):

Below, some of the great ideas are gathered here. Just smear up the coat and look gracefully hot.

Coffin nails soaked in the black polish will let others say wow whenever they see you. We bet your every hand gesture will encourage the “opposite gender” to hold your hand.

Do You Know? Billie Eilish opted for black coffin nails to match her full channel look at the Oscars Ceremony.

Pink is the most blossoming color girls would love to carry, talking about the teen girls. How about mix and match the trend with this bomb nail shade? Never leave your hands untouched.

If you love changing prints on your nails in the summers, this would be your next favorite for this season. Just make sure that the nail design ideas you choose are breathtaking yet refreshing.

Idea 5 (Blend Of All Soothing Colors):

Don’t forget to astonish your boyfriend or even girlfriends with yet another inspiring look. Yes, we are talking about coffin nails that you should grow in order to glow. So, apply inspiring nail art this fall and look adorable.

16. Purple Coffin Nails (Including all shades)

Purple is the color of lavender and the color of grapes too. How about selecting it to add to your enthralling look. Be it a teen girl or a grown-up woman, this shade is for all.

FYI: When we talk about plants, how can we forget the Purple waffle plant that is exactly what you should grow in your lush green yard.

Matte color tints are in demand these days because everyone wants a natural look, and Matte promotes that look. So, make sure to go with everything nonglossy (be it your nail paint or lip tint) and impress everyone.

Why nude color? Well, nude fashion is all about wearing a color on your lips or nails that match your skin. So, choose nude colors for nails and steal the glances of all the dudes.

Yeah, boy loves girls with minimal makeup on their faces or nails. Stun your man with this look.

Many people have asked, can we turn stilettos into coffin nails?

As conversed before, stiletto nails are closely related to coffin-shaped nails but with much-pointed tips. Accordingly, you may need to get your nails’ shape re-done.

Beach nails designs are immensely implemented, especially when it’s a “beach day” in the spring and summer season. Are you a lively girl with vibrant style? Get along with these nails.

Interesting Tip: Do you want to feel the vibes? Don’t forget to get handy beach accessories like a portable fan, funky glasses, and lovely earrings.

Embellish your coffin cut nails with quirky designs and vibrant hues. For instance, we would suggest you give a marble touch to the nails and let every single gesture of your hand enthrall the others because marble-printed nail art comes out as a unique piece of fashion these days.

Christmas is the Eve of happiness and we celebrate it in any way. For instance, we carry attires that match the theme or put on matching nail paint.

Women who never fail to astound others on every event by following the relatable and latest trend would love instantly applying these nail art designs on Christmas eve.

Buying Tip: For all the celebrants! Are you ready to bestow upon your loved ones with spectacular presents on this Eve? Check gifts here!

Diamonds are girls’ favorite stones, and the jewelry or trends that include them are completely enticing, glamorous, and pulchritudinous.

Thus, if you really want to dwell on luxurious feelings, you must carry out these ideas.

For all the decent and simple ladies, these ideas will be “a quick choose.” Just do nothing else other than wearing a French manicure on the nails.

Ombre means a blend of two shades that are evenly merged up with one another. However, it is a little bit tricky task to mix different color tints but surely a “win-win.”

Coffin Nails Ombre will undoubtedly be your final go-to look.

Can Coffin Nails Be Short?

Yes, they can be short as per your desire. Alongside this, make sure not to deform the shape of the exact coffin nails.

How Much Do Coffin Nails Cost?

Coffin shape nails cost ranges from $30 to $100. However, the price range varies from spa to spa, whereas the DIY set of fake glue-on coffin nails is undoubtedly inexpensive. Hence, you make style affordable in any way.

Coffin Nails are the best shape of them all, which you might have previously opted for. Hopefully, these ideas will help you move with a different look every day.