Weed, unwanted plants like poisonous mushrooms or the Marijuana that’s illegal to grow in many countries including various states of USA like Alaska, Texas, New York & Ohio.

Despite being injurious to health and harmful to grow in the homes with pets and kids, still no one can deny the desirable and appealing fascination to the gardens.

Here it is: we have got a list of 14 plants, flowers, and bushes that look exactly like Marijuana, weed, hemp, or cannabis yet can be grown easily and legally in all parts of America without challenging law and enforcement agencies?

Here is the complete list along with tree and leaf image comparison:

Mint is one of the top herbs that look like weed but aren’t.

Mint remains stick to its soil and doesn’t mix well with other plants however growing mint and weed together is not a good idea.

Why? Because, you know mint is used in many home-related cuisines and dishes, but we cannot even use “some” weed in there. Hence, it is not a good idea.

The weed buds and weed leaves look quite similar to each other so there are chances that mint may crowd the weed out.

Not just leaves, but the pattern of growth for mint is also similar that of cannabis with the bushy structure of leafy branches.

Do you know: Mint itself has so many varieties in which some have fuzzy leaves while others have bushy.

To grown mint in your garden, follow the instructions given in the video below:

Tip: when gardening your plant, you must own the best garden spiral hole drill planter to plant the seeds evenly in the ground’s needed depth.

Okra is another plant with utmost similarity to weed especially the weed buds and okra buds are the same.

If you have an aerial view of an okra garden, you may assume it a garden full of cannabis.

It is one of the plants that looks like weed. Okra flowers look like weed and make it resembling cannabis or marijuana mostly

It has white flowers just like the weed plant.

Okra produces edible spice that is used in many international and national cuisines especially in south Indian and Asian dishes. Moreover, the plant is rich in nutrients.

Once cops in Cartersville were having copter survey where they found okra grown in the garden of a house. They arrested the owner considering it cannabis. However, later realized it is okra.

Okra grows best in the tropical surroundings that we found in abundance in south Africa, and Asia. You can also grow this rich-in-nutrients, spice-enriched plant in your garden.

However, it is one of the plants that look like weed but aren’t and gives an assortment of colors of leaves that can add a lot to the outlook of your garden. 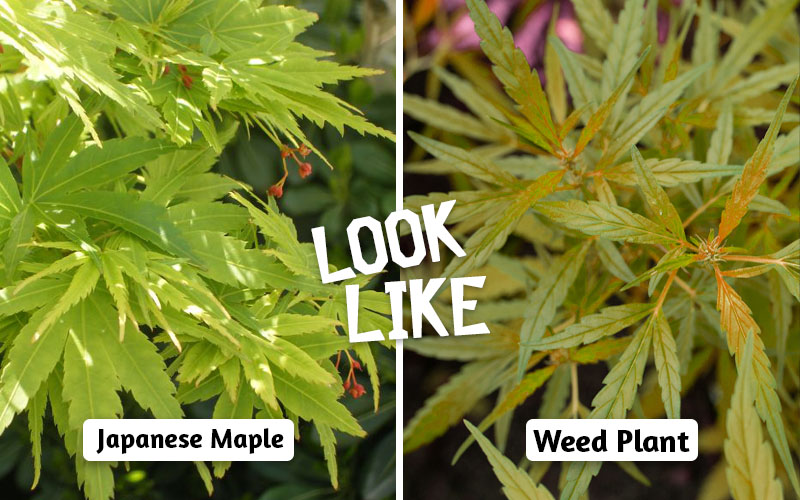 Japanese maple is a beautiful plant that can be grown outdoor in the soil as well as indoors in containers.

The plant is native to Japan, Korea, and China in the central.

Japanese Maple Leaves are not just similar in color but also in shape to the weed plant.

You can grow dwarf and adult Japanese plants in your garden.

Here is the video guide on how to grow Japanese maple in your garden from seeds.

Sunn hemp is not industrial hemp but a legal-to-grow plant in garden similar to weed. Just like weed, it has tall branches and bushy leaves that spread all over.

Sunn hemp is mainly found in India; hence its other names are madras hemp, Indian hemp, or brown hemp while its leaves buds and branches are all similar to weed plants. 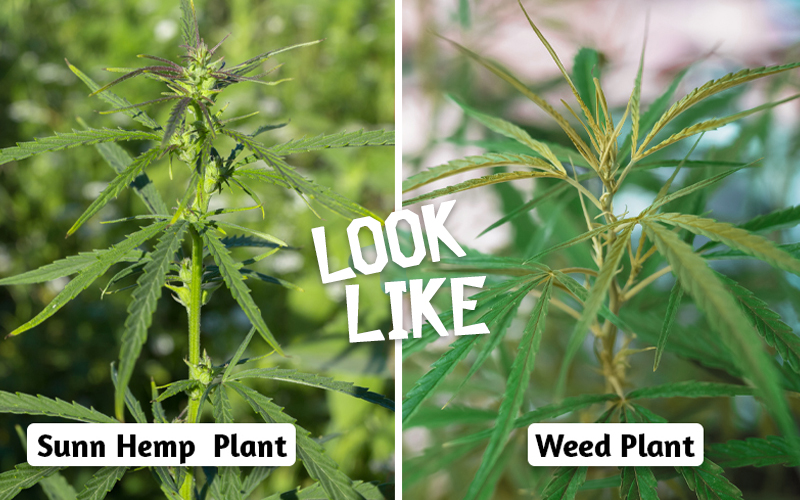 Sunn hemp is not a spice but a practical plant with so many advantages such as, it is a great source of fiber, it is used in textile industries, and used as biofuel too.

You can grow this plant in your home easily, here is a video guide for your help.

Cranberry Hibiscus is also one of the plants resembling weed buds however except the color of the leaves that’s more like brownish in the texture than green.

However, apart from this trait, the shape, the size, and the patterns on the leaves are almost similar that makes Cranberry Hibiscus one of the plants that resemble weed for the color-blinds. 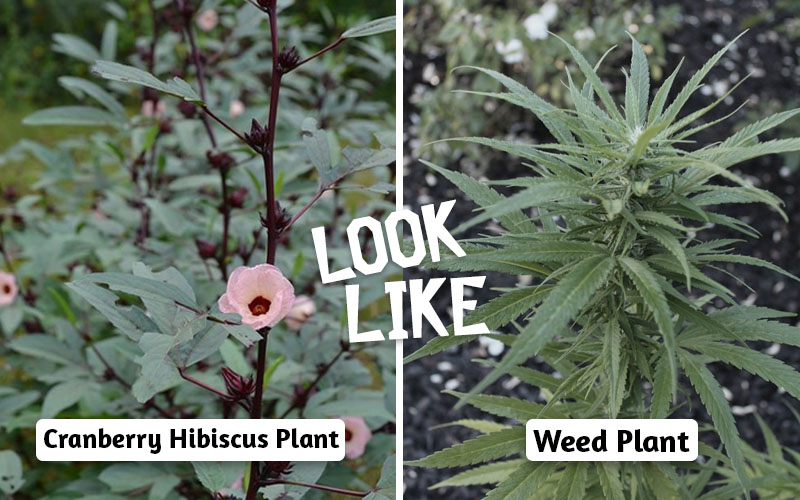 This legal plant will give your garden the same outlook that it would have with the cannabis plant.

You can grow it easily in your yard or garden and for more a weed-alike-look, you need a bigger space for this plant.

How to grow it, find in the video tutorial below:

Kenaf plant is not just the plant that is similar to weed but it also has almost similar properties to the cannabis plant to some extent.

Do you know: “Kenaf doesn’t get you high but shares properties of cannabis due to which in Latin it is called Hibiscus Cannabinus.”

Kenaf is a very useful plant and despite having similarities with cannabis, it is legal to grow for the sake of making paper, fiber rope, and twines, etc.

Oregano is the nearest look-alike of weed because not in powdered form, its texture, look, and even smell feels like weed.

We have seen some funny incidents where school students were tricked by their seniors who sold them weed lookalike spices, calling it marijuana. LOL

Spice doesn’t have to do anything with properties of weed. It has amazing benefits for health with no side effects.

It is widely used to make delicious food.

Commonly called a coral plant, it is quite similar to weed in appearance yet completely different in the essence.

The biggest similarity you found is between leaves of hump plant and coral plant both have jagged textured leaves with pointy shaped ends.

Jatropha multifida or coral plant is famous for its pink flowers and most of the time searched on the internet as “plant that looks like weed with pink flowers.”

It is easily growable in homes, yards, and pots.

This plant has two uses, one of course the ornamentation and secondly for its therapeutic impacts.

To make this weed look like a flower plant you need a cool zone, houseplant soil.

Cassava is actually a root crop but the leaves it grows and its stems, they resemble just like cannabis in the first place.

However, when looked closely, the leaves miss the palmate or the toothed texture that you find in the leaves of cannabis plants.

Cassava leaves are more grown for ornamental purposes while the root is used as vegetable and herbal medicine to treat tiredness, dehydration of diarrhea, sepsis, and to induce labor.

FYI: These are cultural and ancient uses of this herb with scientific evidence.

Sweetfern is an aromatic herb with leaves resembling the leaves of weed or cannabis. Sweetfern is one such plant that looks alikes of weed that some people think is maybe another variety of cannabis.

The stems have the same tooth and conical shaped leaves just like the hemp plant.

Being an aromatic herb, it is used and grown in the garden not just for the purpose of ornamentation but also to get a good and sweetened smell.

It can be easily grown not just in the yard, lawns, and open places but also in the small pots just like the herbs like aromatic saffron.

Marigold, also known with its scientific name Tagetes Minuta, itself is a weed; not the cannabis or hemp or weed but a plant that grows anywhere for no reason.

However, its leaves when they are small and the plant when it has not been mature enough to get flowers, looks like the weed plant of cannabis.

Once it starts to get orange flowers, it can be easily identified as a non-cannabis herb. However, if you trim off the flowers, you can have in your garden as one of the plants that look like weed.

Being a weed, it grows itself up, however you need to be a little conscious that it doesn’t overgrow to affect the beauty of your garden.

Scarlet hibiscus is a tip to toe plant that looks like weed. Its leaves, pink buds, and the way it grows in the garden looks exactly like a weed.

There are chances that copes might come to your place considering Scarlet Hibiscus the weed plant that you have grown it illegally.

However, the only difference you find between scarlet hibiscus is the aroma that’s missing in it because marijuana has a very scented smell that can be felt from quite a distance.

Do you know weed term is also used for plants considered undesirable in a particular situation, or grow very fast to cover the whole ground?

Such weed plants don’t look so good in the gardens and disturb their overall beauty.

Therefore, People use plenty of solutions and formulas to kill weed plants.

We also have some dry tumbleweed plants with miraculous properties.

Have you heard about Rose of Jericho?

It is known for bringing good luck, increase money, and get the love of your life back.

It appears as a dry dead ball of weed but blooms like a rose, that is, when soaked does wonders. 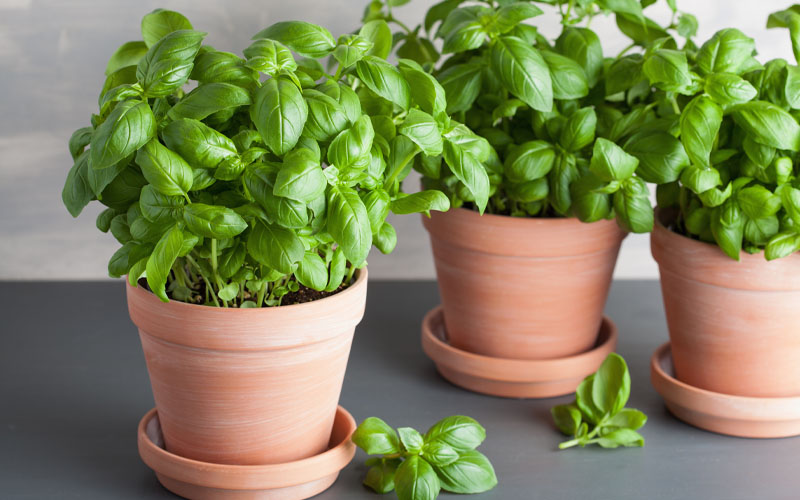 Not usually, but whenever summer starts or weather starts to get a little hot, Basil wildly grows and covers the whole ground. 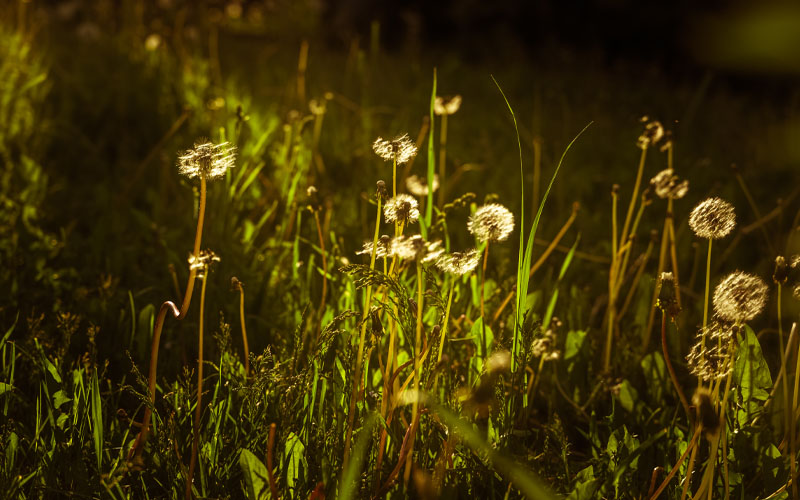 Dandelions are also weed-like plants, grow in wilds, in uncertain conditions yet can be eaten.

Leaves and flowers of dandelions are used in types of salads and green foods.

Besides, its roots are used to make coffee and leaves for wines. Would you mind giving them a try?

Online you can find plenty of plants acclaimed to be similar to cannabis or weed plant however, the 12 best we have posted here are plants that are similar to weed on the basis of their leaves and buds shape.

Other plants of the category are those which in taste, aroma, and properties are similar to weed. For more information on the plants and gardening tips, keep visiting our blog.