Do you think just Husky dogs resemble wolves and are only cuter and photogenic larger dogs? Well, you need to think again and have a look at Blue Bay Shepherd dogs.

What is a Blue Bay Shepherd?

Blue Bay Shepherd is one of the rare breeds of dog that’s yet under development.

It is created by a Floridan breeder in an attempt to obtain a dog with a lupin (wolf-like) appearance and dog-like temperament (calm, intelligent, and sociable).

Due to his dramatic looks and temperament, the palm bay shepherd has attracted widespread interest and now became one of the top trending breeds Americans are looking for.

You can say when kindness, love, and calmness are packed in a 70-130 Lb. huge Package, it makes Blue Bay Shepherd dog of Florida.

The idea of evolving blue bay shepherds is to find dogs that:

2.  So fine-looking with their incredible blue coat

3.  Very safe and guarding-attitude to keep in homes

Luckily, blue bay shepherds aren’t like wolves on attitude to be left alone but very friendly towards other living beings, including humans and fellow canines.

Breeder Vicki Spencer isn’t new with dogs. She has introduced many sought-after pooches and always uses her personally bred dogs. To bred Palm Bay Shepherd puppies, here is how she worked:

Sixth-generation wolfdogs mean the parent dog was already six generations away from the pure lupin blood. Therefore, it has low like-a-wolf traits.

The other parent, the blue German Shepherd, is a rare and expensive to found dog, just like black German dogs with the qualities that anyone will want in a dog, such as loyalty, active, friendly, and happy attitude.

Learn more about this parent of Blue Bay dog here. 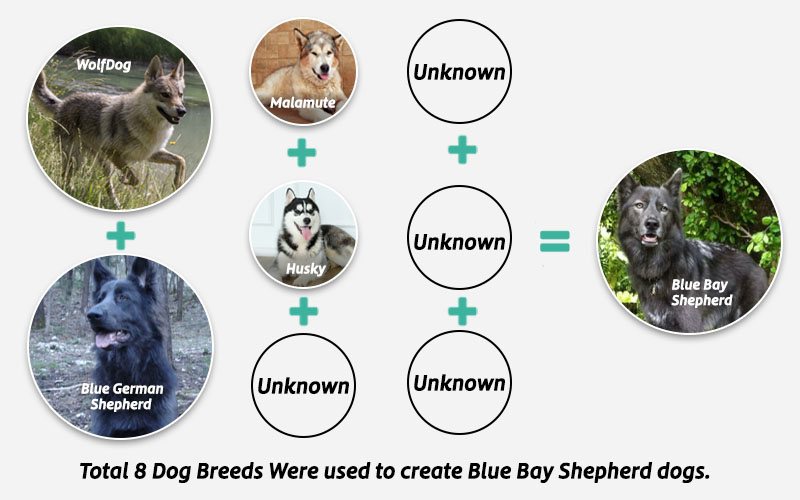 The aim of introducing this breed is to obtain a dog with robust health, stable temperament, and the ability to get trained.

The wolfdog blood makes blue bay dogs tempered in appearance and strong in health, while the shepherd blood makes them trainable and friendly.

The best thing is, in order to eliminate negative traits from the litters, she used eight other breeds’ DNA in the process of matting as well.

Blue Bay German Shepherd breeder, Vicki Spencer, didn’t reveal all the dog breeds she is using to create a desirable dog breed; however, traces found that these dogs also have genes of Alaskan Malamutes and Siberian Husky in them.

3. How Was Name Of The Breed Determined?

The first litters of today’s blue bay shepherds were produced at the Palm bay location in Florida, and they had this elegant blue color; therefore, the name became Blue Bay Shepherd.

Blue clarifies coat color, Bay is the location, while Shepherd shows they have trainability obtained from their one parent, old blue shepherd dog.

Besides this thing, the breeder also explained that blue bay dogs are yet under the process of development, and once it becomes standardized by consistent breeding, we may see coat colors .

She said that the discoloration or color differences would happen naturally. Blue bay shepherd puppies can be developed in combination with tan, black, and blue color coats naturally.

She also said that coat color might fade and become lighter when they become mature.

You must be concerned before buying a blue bay shepherd and bringing home about the wolf blood content as wolves are wild, secluded, and not so friendly towards humans and other fellow canines.

Well, you shouldn’t be worried about the lupin blood in Blue Bay Shepherds because the breeder revealed:

“wolfdogs she has used in the matting were six generations away from their pure wolf blood.”

Also, the first-ever litters of blue bay shepherds had 30% content of wolfdog blood in them, but now blue bay puppies have a minimal amount of wolf DNA in their genes.

This DNA percentage will decrease even more in the litter produced later, as now the matting occurs only between Blue Bay Shepherd pairs, many generations away from their pure lupin or German shepherd blood.

Temperament You Can Expect From Blue Bay Shepherds:

Here is the fantastic temperament and habits of Blue Bay Shepherd Dogs you can expect to have:

You should also note that the dog’s temperament and behavior also depend on the training and the environment they live in.

You can shape your doggies’ attitude by giving them the right environment while raising. Dogs are just like naughty little kids; if tamed rightly, they will grow up to be your best companions.

Also, despite having Lupin genes, these dogs are gentle around the livestock and other small animals.

The appearance of The Blue Bay Shepherds:

A blue bay shepherd is a thick, tough, large, very charming, and appealing dog in appearance. Their wolf-line background has played a keen role in generating athletic appearance for them. They have:

Blue bays are created with the aim of being large tall dogs. Just like huskies, these canines are also very hefty in size and weight.

· Females will be taller but a little lesser in weight, like 30 inches tall and 70 to 85 pounds in weight

German Shepherd and wolfdog are both among the most active breeds of dogs with a massive history in serving humans.

Therefore, you can expect their crossbred Blue bay shepherds to be extremely active and energetic dogs. Reportedly, BBS dogs can handle a 4-mile hike with still energy spared in them.

If you want to adopt these dogs, there should be a large fenced yard that can let them roam around easily. However, do not think that it would be enough for your dog’s exercise requirement.

You will have to take an active role and spend time with them while playing fetch the balls. Make sure to use a launcher to throw the ball to an immense distance so that your dog can enjoy bringing it back.

Although the blue bay shepherd breed is yet in the underdevelopment process and has to gain complete breed recognition, we have still managed to gather some information from the experts regarding these dogs’ grooming requirements.

Regular grooming is a must for BBS dogs because they have thick coats, a playful attitude, and loves walking around the dusty yards.

Therefore, to keep the hair untangled, regular brushing is a must. Though these dogs are tough but their skins are so tender; make sure to use brushes that are gentle to their skin.

It will also help dust off the debris from their body and keep their blue furs shiny like silk coats.

However, although they don’t mind grooming, if your dog shows anxious behavior, use gadgets like soothing anxiety suction mats to busy them with food and brush their fur.

Do you know the food serving per meal for a dog is directly proportional to its weight and size? A dog with 100 LB weight will require 5 cups of food a day.

Ensure the dog food is measured-well before serving because they are also reported to have sensitive stomachs.

Moreover, talking about health, GSDs are prone to have issues like hip dysplasia in their life. However, in recent mating, the Blue bay shepherd breed doesn’t have prosperity for hip dysplasia.

Blue bay shepherds aren’t rare but less in numbers due to being a newly introduced breed.

You may find breeders near you selling dogs in the name of Blue Bay Shepherd puppies.

However, you should never be conned because there is only one recognized breeder and introducer of Blue bay German shepherd, i.e., Vicki Spencer from Southern Breeze.

Don’t trust people claiming their ordinary dogs to be BBS pups and buy only from Vicki spencer.

Here check the complete interview of Vicki Spencer, the founder of the blue bay shepherds:

Blue bay shepherds are as loving and unnoticed as azurian huskies. However, now you would have got enough information about blue bay shepherds. If you have any queries. Pls, write to us.