A pack of Huskies, from which mostly died, some ran away, only two remained standing, waiting for their team for 11 long months.

They both face neglect, bore hunger, and suffered loyalty but never abandoned the love of their owners.

Without a doubt, Taro and Jiro rose the name of their fellow canines and appeared to be the most demanded breed of dogs in 1990.

After the fame, Japanese and American directors came forward to commemorate the sacrifice and bravery showed by dogs.

They made different movies.

The other movie, made by Walt Disney under name Eight Below.

It was about the pack of eight huskies who survived.

In the film, the director has used purebred huskies for the role of Sakhalin Huskies.

After the movie, many people were confused about, is eight below a true story.

For your information, yes!

It is, and so far, three movies that have been released based on Eight Below True Story.

Though directors made some variations according to the box office demand, however, the line of the story is real.

Before you go to read the complete real story of Sakhalin Husky, Japanese dogs, Taro, and Jiro, who survived, have some glimpse of the breed, its origin, and how it is on the verge of extinction.

Based on the traits mentioned earlier, Taro, Jiro, and other companions were loyal dogs, as cited in the story and the movies.

The Eight Below True Story:

It was a cold morning in January, back in 1957, during International Geophysical Year when a team of researchers accompanied by 15 (all male) dogs went on a winter expedition.

The dogs were Snow Husky or Karafuto-Ken and belonged to Sakhalin Husky breed.

The team from the Japanese Antarctic Research Expedition or JARE decided to move to the northern part of Japan, Sapporo, in the Syowa (Soya).

As per plan the team had to stay there for one whole year for research. After one year, another team of some more researchers would go to the Base, to complete the work left by the first team.

The dogs were at the Base to help them with Siberian outpost dog sledding.

For your information, Polar Japanese Huskies are trained and very much great at pulling the weight and sleds. These dogs are so loyal, playful, friendly, and danger-less. There the only problem is their appetite.

A Karafatu Ken eats 11 tons of Salmon per day.

Snow Strom at on the way to Syowa:

As per plan of come back, the team, 11 researchers and 15 dogs had to travel in an Icebreaker from the Base to reach the station in East Ongul Island within a day.

However, nothing went according to the plan as a strong storm hit and make them stuck in the ice…

The team was, now, away from the Base and far from the city too, while the Snow was getting worse with each passing day.

They were all struggling and praying for survival.

The dogs and humans were together facing the dangers of life and short supply of food, while Polar Husky companions were always hungry to eat Salmon.

The Research Team leader was continuously trying to contact the Japanese Icebase as well as the authorities, but everything was going in vain.

Also the Snow was becoming denser and thicker with each passing moment while the supply of food was continuously shrinking.

There was no sign of survival but then a United States Coast Guard Icebreaker found them at the Bruton Island.

Rescue and Separation between Loyal Dogs and Their Owners:

The team was rescued by the Icebreaker of the United States Coast Guard, they had managed to contact the Japanese authorities.

A helicopter came to evacuate the researcher from the storm and asked them to leave their stuff and go with them immediately.

However, dogs were not rescued because they were fat and big and total 15, they couldn’t be fit in the Chopper.

The humans had to leave their canine companions at the point, tied in the chains, with a limited supply of Salmon and a thought that the next expedition team would be here within some days to take good care of their huskies.

Researchers had a good time with dogs and went so emotional while saying goodbyes to their sled leaders behind.

However, they were severely criticized for their act of leaving the poor animals behind to die.

Team members, nonetheless, tried to justify themselves, but nobody could validate the reason for leaving 15 loyal dogs behind.

Fifteen Dogs and Their Fate in The Snow:

They were total of fifteen dogs, chained, with not enough supply of food to survive even a week, and they had no training for hunting.

As the hair on the body and face of these dogs are thicker like polar bears; hence the Japanese Expedition Researchers were not much worried about the cold but hunger.

They were afraid to erupt cannibalism among the Kens.

However, fate became even cruel for the canines, when the landing of the second group to the Base was suspended.

Fifteen dogs, who have been so loyal and loving to their owners, despite loyalty, were suffering and waiting for their death or survival; there seem no other option.

Team issues the list of the dogs left behind.

Return Of Expedition At Syowa Base – After 365 Days, One Year:

It took one year to the JARE members (Japanese Antarctic Research Expedition Program) to go back to the Base and recontinue their research work, on January 14th, 1959.

This was the time to find out what happened to the dogs, left behind, and it was time for Taro and Jiro to become heroes.

When the JARE reached the station, they were expecting to find the scraps of dogs’ bodies, but to their surprise, only seven were found dead.

Their remainings were on the ice still chained in their collars gifted by the owners.

Apart from this, the other eight dogs, they had managed to slide their necks and weren’t at the base.

During the research, no other dog was found alive, but Taro and Jiro.

The three-year-old, youngest members of the pack of huskies were discovered around the base.

The rest of the six were never found. Riki, Anko, Kuma, Deri, Jakku, Shiro were among some treasures abandon their masters.

Here is what next happened to the real tale of eight dogs who survived.

Taro and Jiro the Star Canines and Traditional Heroes of Japan:

When the news about the survival and finding of Jiro and Taro came out on news channels, every Japanese and English were eager to find a breeder and adopt Karafuto dog.

The hero dog brothers were sons of the Kuma. Kuma was also part of a research team, a japanese husky dog who belonged to the Furen point of Antarctica.

He was a purebred and one of the eights who survived and character of the Eight Below true story film.

However, Kuma disappeared, and nobody knows where he went along with the other five dogs. Taro and Jiro are still alive in hearts, though their breed is on the verge of extinction.

When the Japanese team reached the base, they found two dogs, Jiro and Taro, around the base, wandering.

Though dog brothers were alive; however, their health was telling about the tragedies of the survival they went through.

The team told the channels about exciting facts about dogs:

Jiro continued to work with the team for almost a year and died in 1960.

Before death, he did Siberian outpost dog sledding as a leader for his team and served them till the end.

The cause of the death of Jiro was natural.  Jiro’s body is embalmed at the National Museum of Nature and Science. 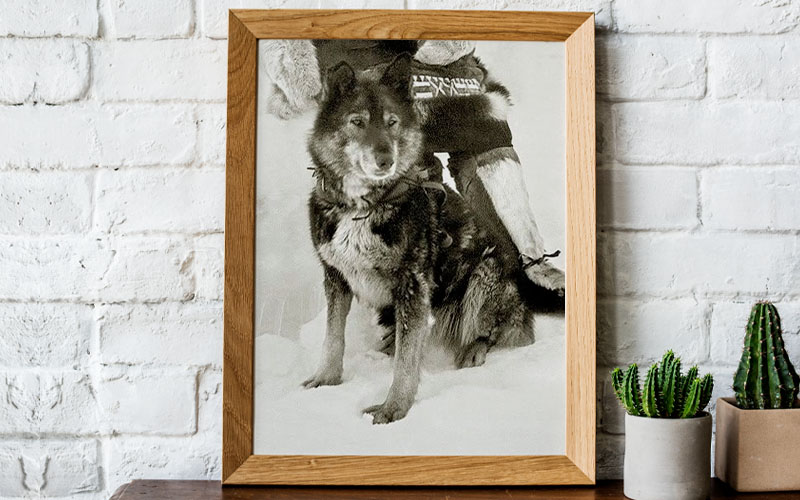 Taro, his health didn’t permit to work anymore. Hence he came to his homeland in Sapporo and rested in the Hokkaido University, Tokyo, until 1970 when he finally passed away.

The body of this hero is also displayed for memory at the Museum of National Treasures of Hokkaido University.

If you ever go to Japan, go to Hokkaido University in Sapporo and ask where Botanical garden is, there the body of Taro is placed. 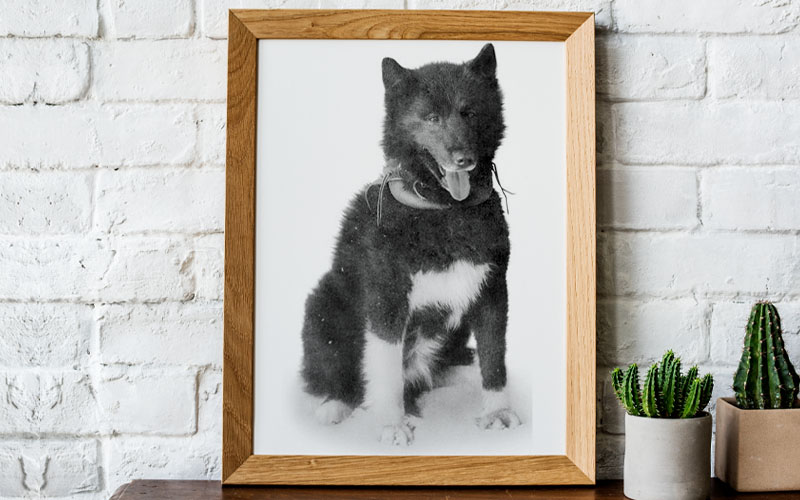 Dogs, 8 who survived and 7 who sacrificed their lives, their monuments are scattered all across Japan, talking about anticipated bravery and the sacrifice.

JSPCA, Japanese Society for the Prevention of Cruelty to Animals, paid the first-ever tribute, in 1959, when Jiro and Taro, both were found and still alive.

Where to Buy Polar Husky Puppy – Sakhalin Husky for Sale?

Sakhalin Husky breed is on the verge of extinction despite the fact, it had been so popular and still being searched over the internet.

According to sources, till 2011, there were only two purebreds remained from Sakhalin Husky breed in the world.

Therefore, if you need to buy a Sakhalin Husky dog or puppy, you can find a mix-bred husky dog or a purebred husky.

It is being suggested because if we compare, Sakhalin Husky VS Siberian Husky, there is not much difference except the face of the Kurafato ken.

It is more like a polar bear, at the same time, the Siberian dog looks like a wolf.

The market price of the dog will vary concerning the availability of the breed as well as its’ purity.

All dogs are unique, and they all love their owners more than life and oxygen.

Not just Sakhalin dogs have sacrificed themselves for the sake of love they had for humans, but there are many more, including Hachiko, the Akita breed dog, and Laika, a mongrel to be the first dog to go in space.

People often ask what breed was Laika; the answer is unknown, some people claimed it a purebred of Russia while others think it was mix or mutt. Still, it helped humans in their unique way.

It shows you mustn’t be worried about the breed, as long as it is canine because no matter what, he will never leave you alone when needed.