Promise, Eternity, Wedding, Power, Wealth, Freedom, Strength, Royalty, and so many others – each type of ring has a different meaning, a specific purpose, and a unique symbol depending on finger placement or which hand you decide to wear it on.

Yes, rings are more than just a mere fashion accessory. They have their meanings and symbols.

A ring on the index finger (Jews) or in the wedding ring finger (Western Culture) symbolizes marriage. In contrast, a ring on the middle finger may hint at being single.

But thumb rings have a deeper connotation and suggest a person’s behavior.

Wearing a ring in the thumb is connected to a person’s sexuality, freedom, loyalty, power, etc., while A Pinky finger ring is associated with professional status.

There is a lot more on thumb ring meaning. What’s that? Let’s dig a little deeper. 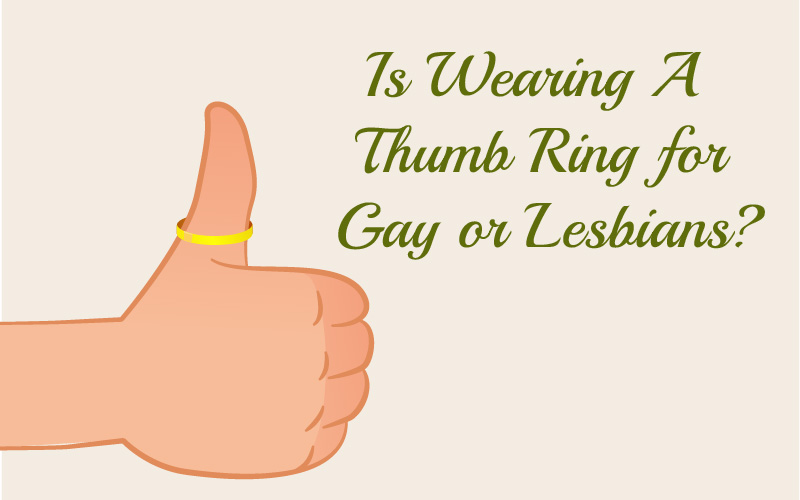 Since ancient times, a thumb ring has been associated with the freedom of someone. Thumb is unique and different from the rest of the fingers, so wearing rings there represents boldness, courage, and strength to express those differences.

Men can also wear the thumb ring, and for them, it symbolizes power, royalty, influence, wealth, or having an assertive personality.

Some people associate thumb rings with the LGBT community, while some relate it to protection or mourning.

Still, there are so many other good and bad connotations associated with thumb rings depending on which hand you are wearing them on.

Let’s get to know everything down below. 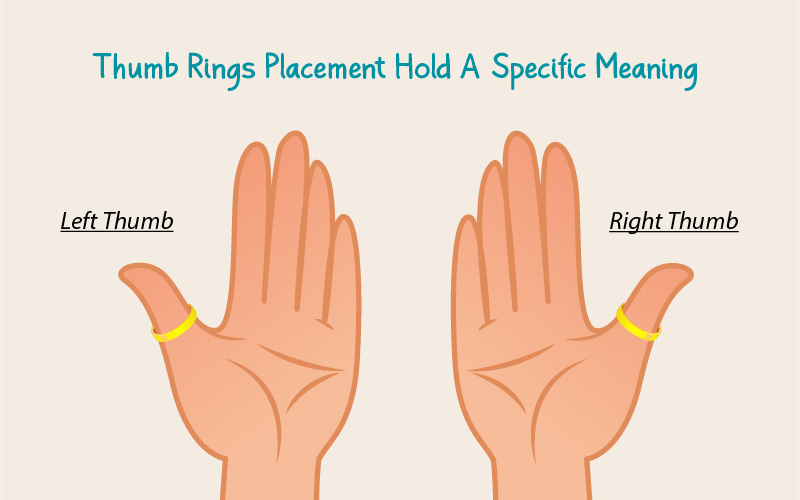 Thumb rings can have different meanings based on their placement in hands. Yes, not only do the ring fingers hold a specific symbol, but the hands they are worn in may also have a unique meaning in some cultures.

They have been used as a fashion statement by men and women, but they also have a prominent involvement in the gay, lesbian, Queer, or LGBT community too.

Sure, you can’t judge a person’s sexuality by a mere thumb ring, but you can’t also deny the meanings it has in different cultures. Don’t worry. We have mentioned everything about thumb symbolism.

In palmistry, all the hand fingers are linked to a specific planet and energy. The thumb corresponds to Mars, the lone planet, and the people who have suppressed and stuffed anger usually wear a thumb ring.

According to ancient Greek philosophy, the thumb represents the sea god, Poseidon, who had an independent personality. Therefore, it is a familiar belief people who wear thumb rings are not trend followers. Instead, they have their dignity and strength to make a new path.

The concept of Yin and Yang is popular in Chinese philosophy. Although they are not directly related, generally, the yang (left) thumb represents masculine energy, growth, and brightness. And the Yin (right) thumb represents feminine, calm, and soft energy. 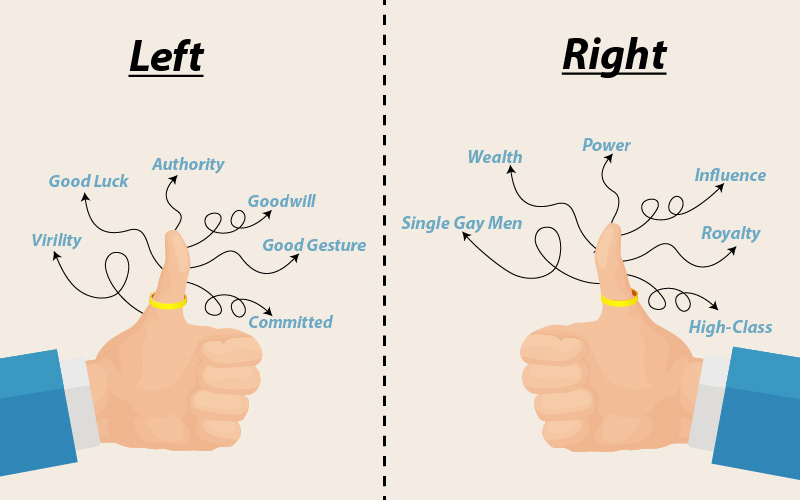 Thumb rings for a man on the right hand conclude either he is gay or has a platonic friendship. As back then, it was not a fashion statement to wear thumb rings. Lesbian or gay people chose to wear them as a queer symbol.

Pro-Tip: Break the stereotypes, be confident, and wear a metallic snake ring on your thumb finger for that extra coolness.

It is also believed that the thumb ring is associated with relationship status. For instance, if a man is in a relationship, he’s most likely to wear a thumb ring in his left hand to highlight he is committed.

People used to wear thumb rings made of metal, wood, ivory, or glass to protect their archery thumbs.

Another possible meaning is that he might have an assertive personality or feels hesitant whenever he wants to do something.

In general, we have seen powerful or influential people from the high class often wear heavy thumb rings to represent their authority, strength, and virility.

Today, however, some men choose to wear a thumb ring as only a fashion statement. Now, the thumb ring symbolizes good luck, good gesture, and goodwill 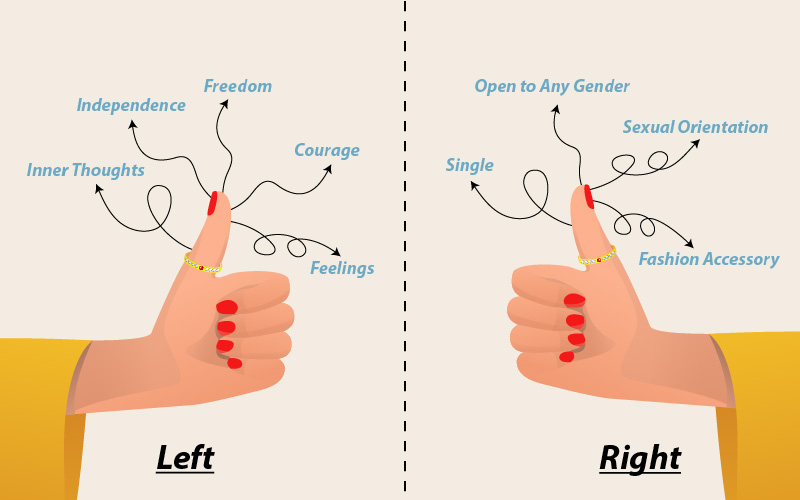 It may represent a person’s sexual orientation, feelings, and inner thoughts. Or it is a clear symbol that a woman is in a relationship

You might also see a lesbian wearing a black thumb ring. Yes, the black thumb ring meaning connects with love, strength, commitment, protection, and power. Often, they wear it as a queer symbol.

But it can also mean absolutely nothing; another prospect for black thumb rings is that widow or the person who lost a loved one wears them to honor their lost persons’ memories.

Pro-Tip: Flaunt a stylish olive tree ring in your thumb as an olive tree itself symbolizes peace, friendship, stability, balance, and wisdom. Highlight your opinion!

A thumb is usually taken as an embodiment of willpower, strong opinion, and a firm grasp on one’s life. The right hand is generally seen as the dominant, active, or physical hand that makes most gestures when we talk.

In contrast, the left hand is considered the ‘mental hand’ that displays our character, opinions, and beliefs.

Of course, it might be different for left-handed people. But at the same time, it is a general concept and not some hard and fast rule everyone has to follow.

According to palmistry, wearing a thumb ring hints at your robust approach to spending life and that the person has a way of doing things his way. They might be hesitant ambitiously, but they surely know how to power-think.

It represents their individual strength, freedom, and logical approach in getting to where they want to be in the future.

Rings have been used as a fashion accessory since early times. They were named earrings, neck rings, arm rings, or nose rings depending on the place they’re worn, like ear, neck, arm, and nose.

Sometimes, they are just seen as something related to fashion.

On the other hand, people from different cultures and areas link them with spiritualism and mythology based on what the wearer beliefs.

Another meaning of the thumb ring was protection from deadly diseases and evil spirits.

It was a popular opinion of past times that wearing a thumb ring will chase away all the bad fortune, sickness, spells, and demons.

In ancient Greece, thumb rings were restricted for people with low status and were taken as something preserved for influential people only.

In fact, it was a common practice to believe that the bigger the ring size, the higher was the rank of that individual.

Why is that so?

Or why ‘thumb ring meaning’ is a hot topic nowadays? Well, honestly, left thumb or right-hand rings for man and woman can mean anything or nothing as per your belief.

Yes, you read it right.

All the assumptions we heard are based on cultural or historical theories. But it’s never wrong to know what most people don’t know about the thumb rings, right?

From the above discussion, we can conclude that thumb ring meanings are based on assumptions and cultural or historical theories.

Besides, the meaning of the thumb ring varies from one culture to another. Therefore, when it comes to wearing a thumb ring, you shouldn’t be only conscious about the meaning famous in your locality.

Nevertheless, if you enjoy having this accessory, you can wear it, however, make sure you don’t hurt anyone’s cultural sentiments.