Mushrooms are of many kinds and they are the only fungi nobody minds looking at and getting fascinated.

What makes a person getting rid of mushrooms is the deadly, poisonous enzymes that create toxicity inside the human body can even cause death, such as this Galerina marginata the poisonous mushroom we’re discussing today.

Without wasting a second, let’s start and let us give you all the deepest insights and bits and bobs of this deadly fungus.

Galerina marginata, a mushroom known for so names, is deadly and poisonous. It is from the family Hymenogastraceae and species poisonous fungus with order Agaricales.

This mushroom is tiny but don’t go on its such small size because even the slightest intake of this deadly fungus can kill a healthy adult.

Warning: This is *not* a mushroom you have to mess around with.

The main problem occurs when it comes to recognizing the fugus because it is quite similar to many edible mushroom types.

It is said that even an expert Mycologist sometimes remain unable to identify the deadly cryptic galerina and a similar looking edible mushroom.

However, here we have some points and tips learning which will help you to do easy differentiations between the deadly and edible types of mushrooms.

Looking at the size, Galerina marginata or GM has medium size while color of its cap is yellow-brown or simple brown.

When grown freshly, the edges will be straight and crisp but, when withered, colors get faded to tan or buff.

With stipe and gills in brown color, fibrillose ring-zone on the stipe, can be seen rarely. For further information, check lines below:

It has white fibrils and size will nearly or exactly be 2–7.5 cm length and 3 to 8 mm thick.

Here, check the image of Galerina marginata with each and every part labeled for better identification of poisonous vs edible mushrooms. 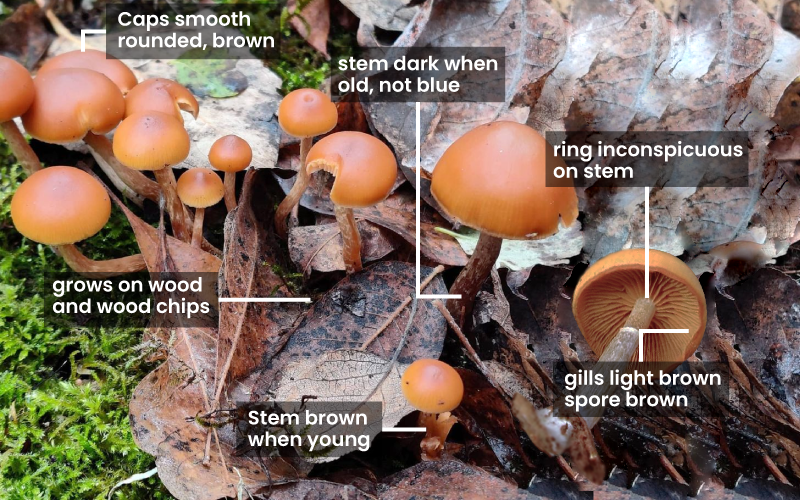 It has got an unpleasant mealy taste but it is not recommended to chew, bite, or even put your tongue on the Galerina marginata mushroom.

It has brown colored flesh and the texture doesn’t change much when it is cut or opened.

Galerina fungus fruits many times in a season while its seasons are too long. You will find it abundantly growing in the season of summer and autumn.

FYI: “Galerina is an easy growing mushroom on the wood decay or deadly stumps in any season.”

Growth pattern of these mushrooms is even confusing because sometimes fruitbodies grow in clusters while other times, you will see a solitary orange cap grown on debris.

Due to such confusions, it is requested to the mycologists and mushroom hobbyists to be very careful when collecting magical mushrooms because several deaths have occurred due to misidentification.

Knowing all the related names of GM fungus will also help in identifying it.

Official name of the deadly fungus is Galerina marginata, but informally it is known with different names such as:

No matter what name you call this mushroom with, it is utterly poisonous and can lead to death even if someone had consumed the smallest amount.

FYI: The mushroom nullifies the Italian myth that any fungus or mushroom grown on dead stumps or wood chips is edible. 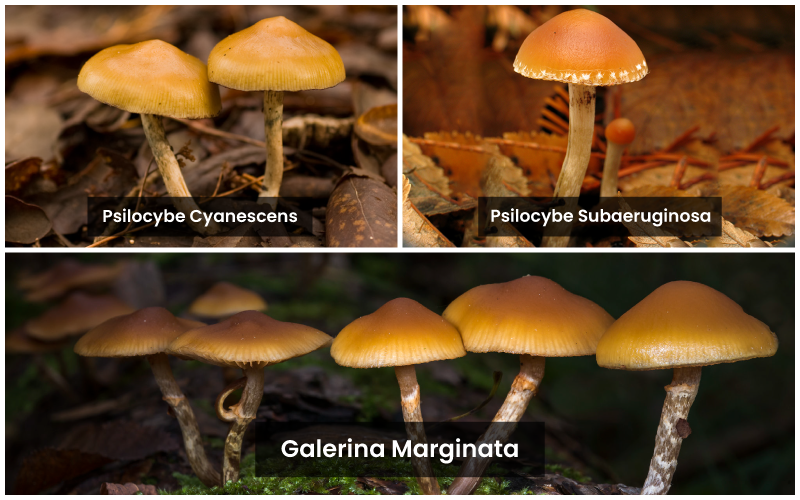 When you are learning about a mushroom that you least want to add in your basket while collecting edible mushrooms, you must know all the similar species.

By doing so, you will be able to take home the original edibles rather than Funeral bell. So, Galerina marginata mushroom looks quite similar to the edible toadstools.

Your familiarity with mushrooms is the thing that will help you find and identify lookalikes of galerina. They include,

Armillaria spp. due to its white spores,

Philiota, it has dark brown sore spores than rusty brown and scaly cap.

These species not just have quite a similar appearance of Galerina marginata but their growth behavior can also confuse mushroom hobbyists.

For example, all these mushrooms also grow on dead stumps, wood chips, and in the wild. Hence forth, it is more than necessary to be confident about which mushroom specie you are taking home, the food or the death.

Therefore, for your better understanding, we are offering a comparison between galerina dead cap and its other lookalikes:

Here are some differences between Galerina and psilocybe subaeruginosa:

the main difference between these two is once again,

Galerina marginata contains deadly amatoxins including sulfur and amino acid. These two enzymes are behind 90% mushroom fatality in humans.

Therefore, at any cost and at any price, it is a must to avoid eating or bringing galerina marginata on the table. In case, anyone had a slightest intake of death cap, the results can be lethal.

What happened when funeral bell goes into your stomach, here are all the poisoning symptoms of galerina marginata written:

Initial symptoms can last for nine hours while the fatal and severe symptoms can cause death within seven days of consuming or eating galerina marginata.

Treatment of this poisonous mushroom depends upon the dose or amount that has been consumed. A lesser amount may not cause death but the consumption more than that can cause death.

What is Galerina marginata lethal dose?

Well, 5 to 10 mg of amatoxins found n marginata can cause death of an adult. For better understanding, here is an example:

Funeral bell mushroom is a part of LBM specie, it means it has very little size.

So, an adult if consume up to 20 tinny galerina mushrooms, it can cause death because Antidote of amatoxins found in galerina is not yet invented or found.

An amount lesser than that can be treated. How? Let’s find in the lines coming ahead.

1. Checking the vital signs or symptoms:

First of all, physicians or doctors start checking the vital signs or symptoms in the patient including: body temperature, pulse rate, respiration rate, monitoring fluids, and electrolyte balance.

Secondly, the doctors will try to make the patient puke to bring out toxic mushroom particles out of their stomach.

Doctors will also have to use the activated charcoal to absorb the toxins from the body of the person who have accidently taken little brown mushrooms.

Panic control by telling the patients it is not a reason to worry and they should not leave the hope for living. It is the most necessary Galerina marginata treatment.

5. Keeping up water amount in body.

In case of excessive diarrhea, measures will be taken to complete the water amount in the body through drips.

Here you need to note down one thing, reports of animal deaths are reported more than humans specially of cats and dogs.

Henceforth, not just yourself but you will have to be equally conscious for your pets to not to take galerina marginata into their stomachs. 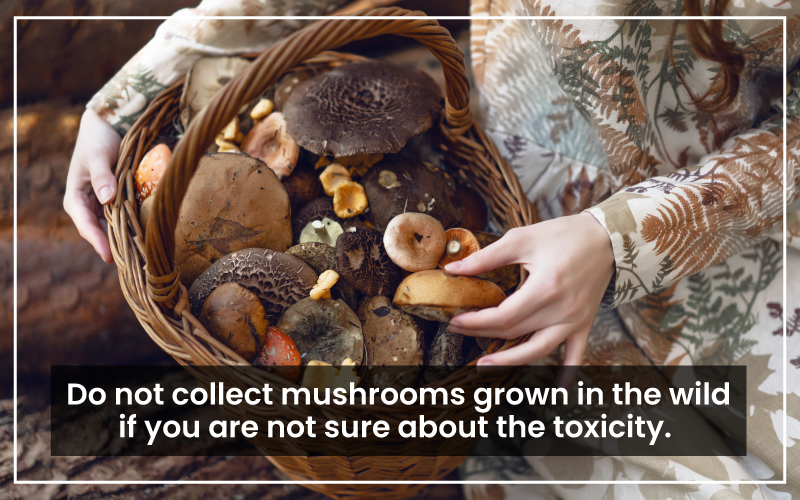 It all depends upon your premeditations and forethoughts while collecting mushrooms for your table.

As it resembles many of the edible species, so you will have to learn to differentiate it from its edible types.

Do not eat mushrooms grown in the wild if you are not sure about the toxicity or safety.

In case of eating, immediately see the doctor without making it late.

This is all about galerina marginata, the little brown deadly mushroom who might kill you. The information is given solely to keep our readers aware and educate regarding toxic mushroom types.

If you have any feedback or suggestion, feel free to use the given below comment box.