There are numerous reasons to welcome the month of beautiful flowers, the season of bright spring, and vibrant nail colors. But most importantly, the time to achieve your dream goals.

Not to mention the 1st day of April or the famous April fools’ day, a custom to happy quote of the month, humorous poems, or one-liner jokes. (we leave the rest to your imagination :p)

Reading the first day of April quotes can be a smart way of starting this month with all the energy and enthusiasm. Moreover, April funny quotes can make your day out of nowhere.

There’s so much to this month!

Special Note: Hey, would you like to astonish your April-born mates with some unique, trendy, and cool daily life products? Visit Inspire Uplift to find fitting presents:

Wish someone a ‘Happy April’ with these cheerful April sayings and hello April quotes of the month:

🌼 “May you get everything you want and need this April.” 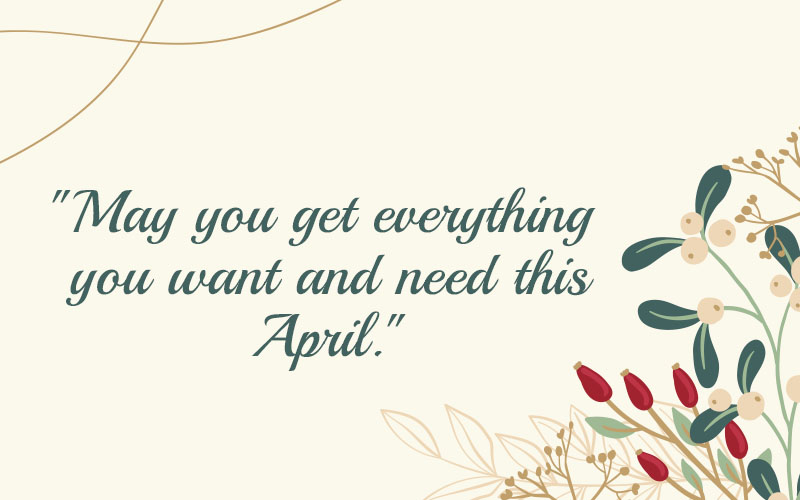 🌼 “Hello, April. Please, be a month of rebirth, regrowth, and renewal.” – Anonymous

🌼 “April. The month of dust and lies.” – Naguib Mahfouz

🌼 “Please, April, fill my days with happiness and love (and money, hehe)”

It is believed that April seems even more beautiful if one looks at it with love in the eyes. And, there are so many sayings about April; the weather for spring, a start of the warm season, and the perfect time for Easter delights.

Here, read some more quotes about April to enjoy the breezy fragrance of spring:

🌼 “It’s finally April, which means I get to have more flowers.”

🌼 “Well, Hello there, April! Just be great and surprise me.” – Anonymous

🌼 “There is something magical about April that makes us want to feel its warmth.”

🌼 “With the coming of spring, I am calm again.” – Gustav Mahler

🌼 “The most beautiful springs are those that come after the most horrible winters!” – Mehmet Murat Ildan

🌼 “Who says February is the only month of flowers when we have Aprils too.”

Do you know earth day is also in April? Click here to read some earth day quotes.:

Send these short April inspirational quotes to someone that needs inspiration 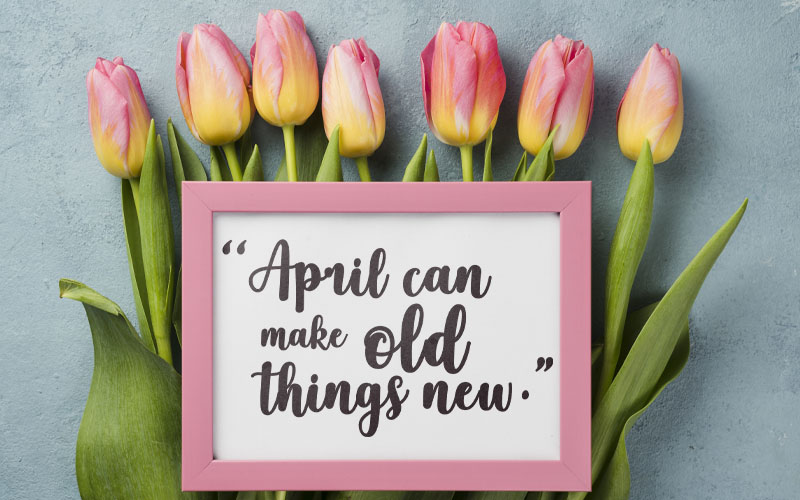 🌼 “April is the month of setting goals. Dream big this month to achieve them as your dreams have the power to turn the impossible into the possible.”

Here, read more April month quotes to live up to your dreams:

🌼 “April hath put a spirit of youth in everything.” – William Shakespeare

🌼 “April is a promise that May is bound to keep.” – Hal Borland

🌼 “Good things take time. That’s probably the reason April is the 4thmonth of the calendar.”

🌼 “April is the kindest month. April gets you out of your head and out working in the garden.” – Marty Rubin

Reading some inspirational sayings to welcome April quotes is the best way to kick-start this loveable month. Here are some motivational spring quotes for you to read this April: 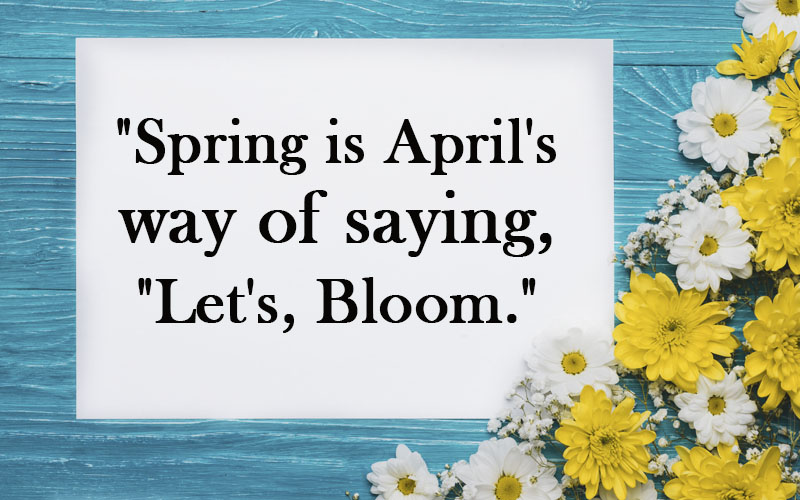 🌼 “April was just beginning, and after the warm spring day it turned cooler, slightly frosty, and a breath of spring could be felt in the soft, cold air.” – Anton Chekov

🌼 “No matter how long April stays, the spring is sure to come.”

🌼 “Our spring has come at last with the soft laughter of April suns and shadow of April showers.” – Byron Caldwell Smith

🌼 “When you see flowers start blooming, believe spring has come to meet April.”

🌼 Long stormy spring-time, wet contentious April, winter chilling the lap of very May; but at length, the season of summer does come.” – Thomas Carlyle

🌼 “Spring in April is just like a child on earth that knows his favorite poem by heart.”

Quotes for People Born in April

Wish all the April borns you know a happy birthday with these 2023 birthday sayings:

🌼 “Special people are those who were born in April.” – Anonymous 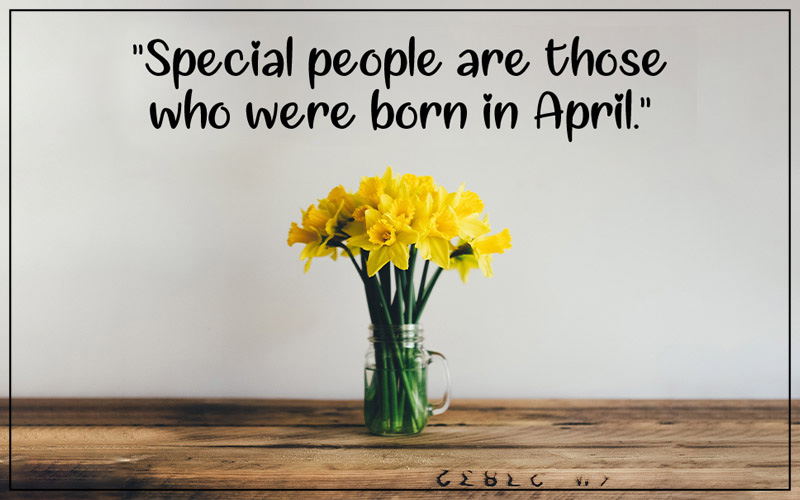 🌼 “February was a love month, March was, well, a month, but hey, it’s April, and finally your birthday .”

🌼 “April babies are the best babies.”

Send a gift to your woman, girl, or guy best friend whose birthday is coming in April.

🌼 “I try to control my crazy and awesome personality, but I was born in April.”

🌼 “Some people can’t be fooled because they were already born in April.”

🌼 “Legends can sleep all day because they were born in April.”

🌼 “Don’t worry, your every birthday is a joke if you were born on the first day of April.”

Taurus and Aries are the two zodiac signs for April. Based on the zodiac dates, Aries lands from 1st to 19th April. However, Taurus dates fall from 20th to 30th.

According to the April horoscope, Aries’s personality is energetic, courageous, passionate, generous, and competitive. On the other hand, the April birthday sign, Taurus, is said to have a gentle spirit. They tend to enjoy serene, beautiful, and calming environments.

Here, read some zodiac quotes for the month of April:

🌼 “Here’s to a woman who knows what it’s like to lead – May you have the courage, the passion, and the grit to keep on rocking. Happy Birthday!” – Anonymous

🌼 “Happy birthday my beloved, Spread your smile and cheerfulness, On this extraordinary day of yours, To my greatest friend forever.” – Anonymous

🌼 “The stars were perfectly and wonderfully aligned the day you came into the world! Happy birthday, my favorite Aries!” – Anonymous

🌼 “Determined, cheerful, and strong, you’re the best kind of friend anybody could ask for. Happy birthday.” – Anonymous

Need one-liner positive April quotes to write on the gift cards to your office friends? Check these short sayings:

🌼 “Spring is incomplete if it’s not in April.” 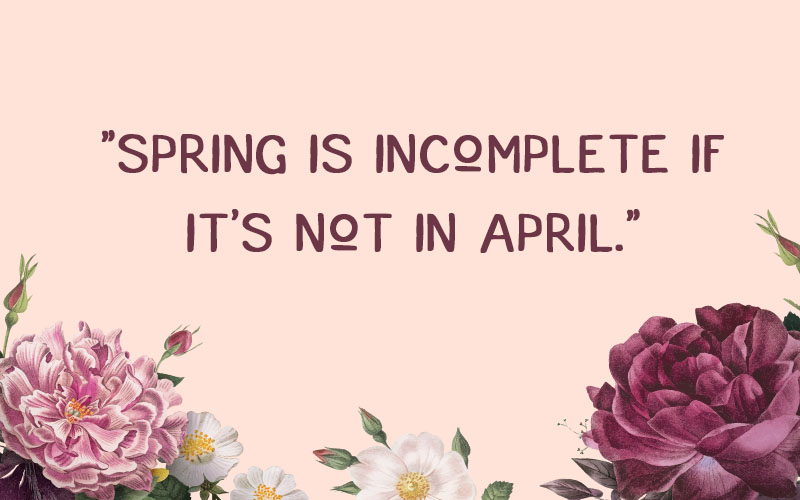 🌼 “I just wanted to shower you with some love this April.” – Anonymous

🌼 “Today has been a day dropped out of June into April.” – M. Montgomery

Here read some poems and April month quotes from writers inspired by the month of spring:

From January up to May

The rain it raineth every day

All the rest have thirty-one

Without a blessed gleam of sun

And if any of them had two-and-thirty

They’d be just as wet and twice as dirty.“ – William Shakespeare

“The April winds are magical,

And thrill our tuneful frames;

The garden walks are passional 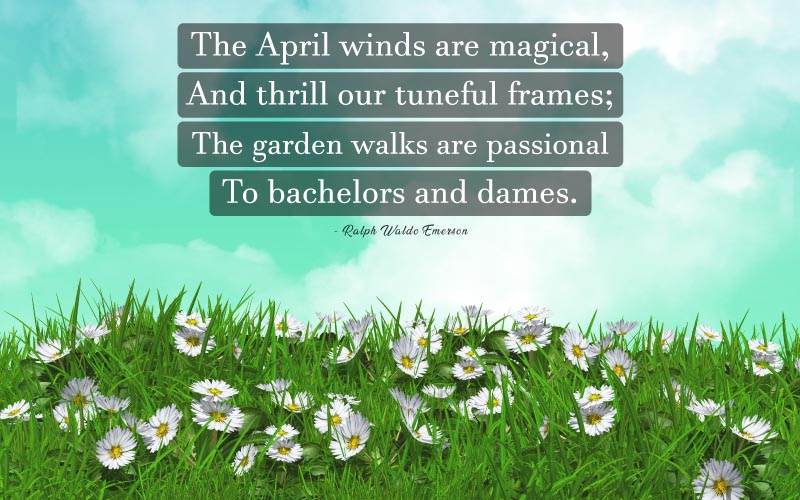 Her death-bed steeps in tears; to hail the May

And all poor April’s charms are swept away.“  – John Clare,

“Again, the blackbirds sing; the streams

Wake, laughing, from their winter dreams,

And tremble in the April showers

The tassels of the maple flowers.“ – John Greenleaf Whittier

🌼 “It is spring again. The earth is like a child that knows poems by heart.” – Rainer Maria Rilke

🌼 “It was a bright cold day in April, and the clocks were striking thirteen.” –  George Orwell

🌼 “You can cut all the flowers, but you cannot keep Spring from coming.” – Pablo Neruda

🌼 “I shine in tears like the sun in April.” – Cyril Tourneur

Looking for the quotes of the month? Read these April quotes:

🌼 “If April showers should come your way, they bring the flowers that bloom in May.” – Buddy de Sylva 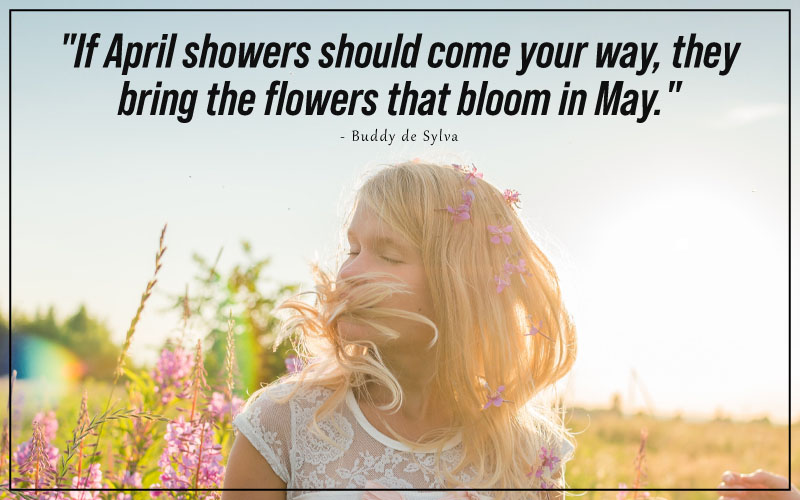 🌼 “Our spring has come at last with the soft laughter of April suns and shadow of April showers.” – Byron Caldwell Smith

🌼 “There is a saying about April: It is a wonderful month filled with love, happiness, and various fools.”

🌼 “We can’t possibly have a summer love. So many people have tried that the name’s become proverbial. Summer is only the unfulfilled promise of spring, a charlatan in place of the warm balmy nights I dream of in April. It’s a sad season of life without growth…It has no day.” – F. Scott Fitzgerald

April was derived from the Latin word Aperit which means ‘open.’ Read these April quotes and let your soul be free.

🌼 “It is one of those April days when the sun shines brighter, the wind blows cooler, and the summer comes nearer.”

🌼 “The sun was warm but the wind was chill / You know how it is with an April day / When the sun is out and the wind is still / You’re one month on in the middle of May.” – Robert Frost

🌼 “There is no glory in star or blossom till looked upon by a loving eye; There is no fragrance in April breezes till breathed with joy as they wander by.” – William Cullen Bryant

🌼 “In the suburbs of Delaware, spring meant not young love and damp flowers but an ugly divorce from winter and a second marriage to buxom summer.” – Andrew Sean Greer

Some of the hilarious April quotes to earn a good laugh:

🌼 “People who celebrate April Fools are the ones who were made a fool in March.” 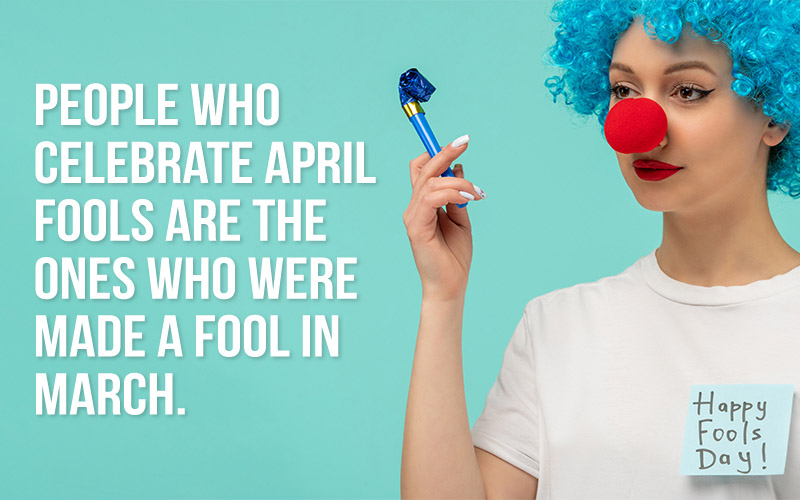 🌼 “March was a long year, but it’s finally April.” – Anonymous

🌼 “Why are people so tired on 1st April? Because they just finished a 31-day year, March.” – Anonymous

🌼 “April Fools went past, and you’re the biggest fool at last.” – Anonymous

🌼 “Everything is hard before April, in April, and after April also.” (Yes. That’s the quote.)

🌼 “Today is 1st day of April. Believe nothing and trust no one (just like any other day).” – Anonymous

🌼 “1st April is the only day of the year when people critically evaluate everything they hear.” – Anonymous

Here, read some character April quotes from parc and recs (Parks and recreation) to have a good laugh (and seriousness):

🌼 “April is all the words of wisdom.”

🌼 “I’m going to tell you a secret about everyone: no one knows what they’re doing.”

Some of the funny yet inspirational quotes for April fool’s day to make it even more entertaining:

🌼 “Happy April 1st, everyone! Today is a great day to make a fool of yourself (before someone else does).” – Anonymous 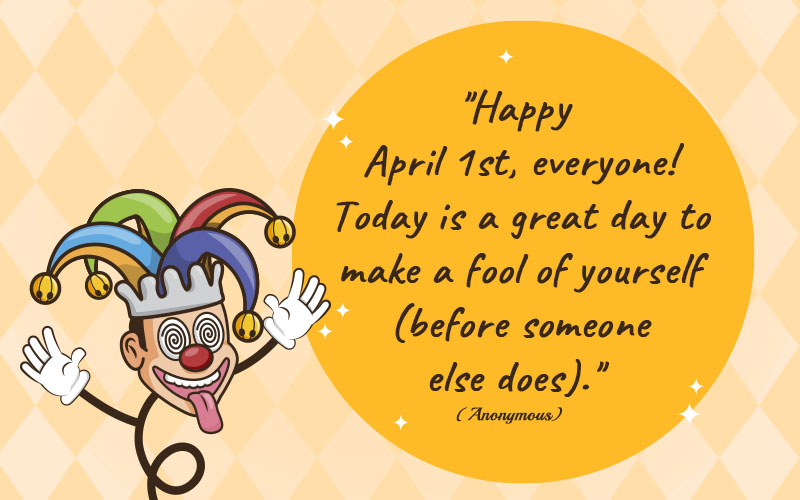 🌼 “Some people can’t be fooled on April Fool’s Day because they were fooled too many times during their entire lifetime.” – Akash B Chandran

🌼 “Everything is funny, as long as it is said and done on 1st April.”

🌼 “You got fooled by a fool on this April Fool’s Day!” – Anonymous

🌼 “You are cute, smart, talented, sweet, and intelligent. And, yes, Today is April Fools’ day.”

🌼 “Cheers to April and my chances to prank a new fool.”

🌼 “Here cometh April again, and as far as I can see the world hath more fools in it than ever.” – Charles Lamb

🌼 “April 1. This is the day upon which we are reminded of what we are on the other three hundred and sixty-four.” – Mark Twain

🌼 “Fools make fools of themselves until they get fooled by some other fool on April Fools.” – Anonymous

🌼 “Thanks to the fools in our life on this dedicated April fools’ day.”

🌼 “Who needs April Fools when your whole life is a joke.” – Anonymous

🌼 “When in doubt, make a fool on the first of April.” – Anonymous

🌼 “If it sounds too good to be true, it’s probably April Fools.” – Anonymous

April: Month of Rebirth & Spring
End the month of love and hope with these April quotes and celebrate this daisy month in your own way!

One of the finest ways to end everyone’s favorite month is with some end of April quotes to stay optimistic for another thrilling month that is coming your way.

Do you believe in setting goals to reach your dreams in April? Is April your birthday month? Do you have any precious memory that connects you to this happy month?

Lastly, we will be making a list of funny, inspirational, and happy may quotes to celebrate ‘it’s finally may.’ So, make sure to visit Inspire Uplift Blog for more such monthly quotes.

Next read: May Quotes