Get ready to Read All the Famous March Quotes & Sayings:

“After February, there’s a March that heads straight to the April of springs.”

March, the month when the ice starts to melt from the mountains, and finally, you can hear birds chirping sweetly from your window. You pop your head from your sluggish blanket and utter, “Awhh, at last, the Sun is back.”

Did you miss the jam-packed basketball playgrounds, the football matches, and chants of the people, The Life, during winters?

We all Did! Say Bye to winters with these welcoming and pleasant March Sayings and Quotes:

Surely, quotations help us to say more in the least words and here are some Month of March Quotes, short and fresh, to make your March 2021 best month of the year.

📜 “Only those with tenacity can march forward in March.” ― Ernest Agyemang Yeboah 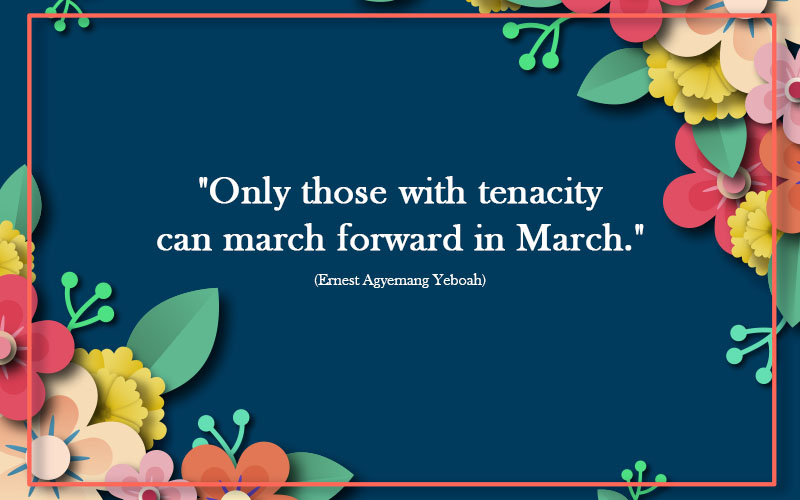 📜 “Where did Gabriel get a lily, in the month of March, when the green is hardly seen on the early larch?”  ―Grace James

📜 “This is the perfume of March: rain, loam, feathers, mint.” ― Lisa Kleypas

📜 “It was March. The days of March creeping gustily on like something that man couldn’t hinder and God wouldn’t hurry.” ― Enid Bagnold

📜 “Let’s march to the March, in search of flowers.”

Our life is March weather, savage and serene in one hour.” ―Ralph Waldo Emerson

Share these March quotes with your brave ladies for the celebration of women’s day:

Quotes allow us to learn from famous personalities that obtained knowledge after years and years of hard work.

Motivational March Quotes inspire us, these quotes motivate us, and also, these quotes give us the courage and power to do things that we once considered impossible.

Yes, these lines sound more like a women’s day speech as if we are motivating you to dedicate your 8th March or women’s day to every woman in your life.

Use these sayings for calendars, self-love, and a special inspiring push to every lady you know. Stay motivated and stay inspired with these quotations of March:

📜 “March, when days are getting long, Let thy growing hours be strong to set right some wintry wrong.” ―  Caroline May

📜 “By March, the worst of the winter would be over. The snow would thaw, the rivers begin to run and the world would wake into itself again.” ― Neil Gaiman

📜 “In March the soft rains continued, and each storm waited courteously until its predecessor sunk beneath the ground.” ― John Steinbeck

📜 “Winds of March, we welcome you, there is work for you to do. Work and play and blow all day, blow the winter wind away.” ― Unknown

📜 “A dry March and a wet May, fill barns and bays, with corn and hay.” ― Unknown

Did you check our February Quotations collection? 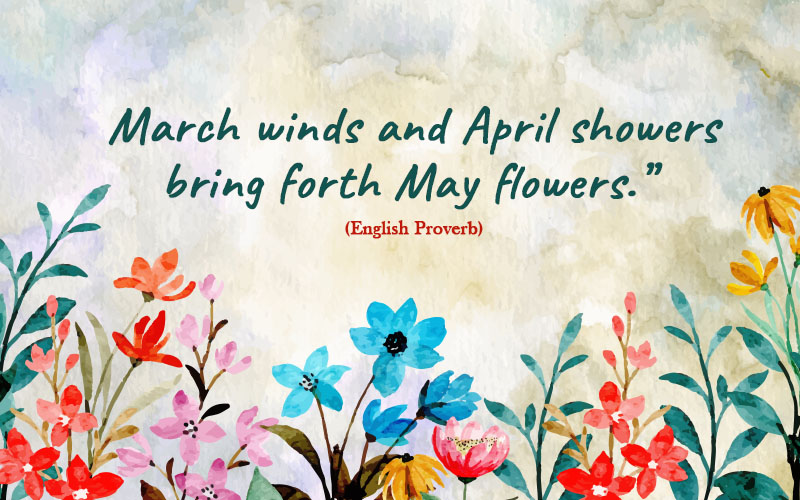 📜 “It was one of those March days when the sun shines hot and the wind blows cold: when it is summer in the light, and winter in the shade.” ― Charles Dickens

📜 “March, master of winds, bright minstrel and marshal of storms that enkindle the season they smite.” ― Algernon C Swinburne

📜 “March is the month of expectation, the things we do not know, The persons of prognostication are coming now. We try to sham becoming firmness, But pompous joy betrays us, as his first betrothal betrays a boy.” – Emily Dickinson

March is about spring, it is about hope, it is about flowers. March brings scenic sights of the earth back to life. In March, life starts coming back to normal.

Here are some welcome quotes you can use to say, hello march, with excitement.

📜 “We March cause spring is almost in the air! – anonymous 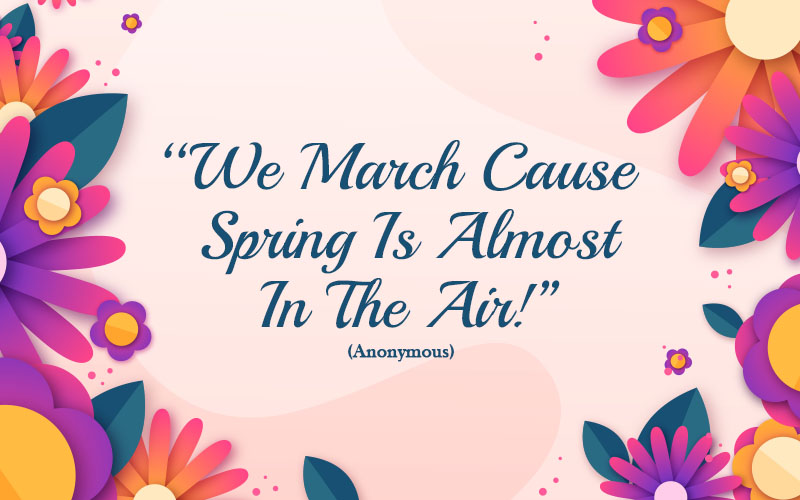 📜 “Springtime is the land awakening. The March winds are the morning yawn.” ―  Lewis Grizzard

📜 “March is the third month of the year and the first month of hope, hope for spring.

📜 “March’s birth flower is the daffodil. It’s all too appropriate that cheerful yellow flowers represent the first month of spring.” ―FTD

📜 “The seventeenth of March. In other words, spring… I mean those in the height of fashion, women or men – can they afford to wait any longer before buying their spring wardrobes?” ―Colette

Spring is the song of nature. Here are some more March quotes, helping you to march warmly towards spring:

📜 “In March, winter is holding back, and spring is pulling forward. Something holds, and something pulls inside of us too.” – Jean Hersey

Read some little women quotes that relate perfectly with the above quote. Here, read some more march quotes:

📜 “Spring makes its own statement, so loud and clear that the gardener seems to be only one of his instruments, not the composer.” ―Geoffrey Charlesworth

📜 “Where flowers bloom so does hope.” ― Lady Bird Johnson

Here are some March Poems you would love to read:

Up from the sea, the wild north wind is blowing

Under the sky’s gray arch;

Smiling, I watch the shaken elm-boughs

knowing It is the wind of March.

We march, we fight, we live

We scream, we die, we give

We want the world to know

We are the human radio

You cannot have fun in any moth without funny quotes because along with motivating you, funny quotes also helps you have laughing therapy for free.

So, here are some Funny month of march quotes:

📜 “Indoors or out, no one relaxes in March, that month of wind and taxes, the wind will presently disappear, the taxes last us all the year.” ―  Ogden Nash

📜 “So many mists in March, so many frosts in May.”― Unknown

Do you want to read some May sayings? Click here to find our Happy May quotes.

📜 “The March wind roars, Like a lion in the sky, And makes us shiver, As he passes by.” ― Unknown

Some more quotations for March:

📜 “March bustles in on windy feet, and sweeps my doorstep and my street.” ― Susan Reiner

📜 “March is the month God created to show people who don’t drink what a hangover is like.” ―  Garrison Keillor

📜 “March is a tomboy with tousled hair, a mischievous smile, mud on her shoes, and a laugh in her voice.” ― Hal Borland 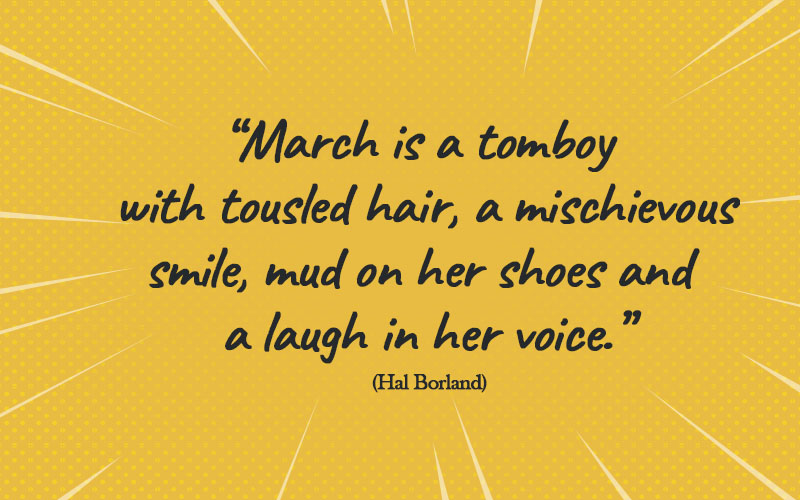 📜 “One Christmas my father kept our tree up till March. He hated to see it go. I loved that. – Mo Rocca

Before ending, here are some more March sayings:

📜 “One swallow does not make a summer, but one skein of geese, cleaving the murk of March thaw, is the spring.” – Aldo Leopold

📜 “I was devastated by the loss of my job in March, although I can understand why it occurred.” – Steven Hatfill

📜 “No one’s gonna give a damn in July if you lost a game in March.” Earl Weaver 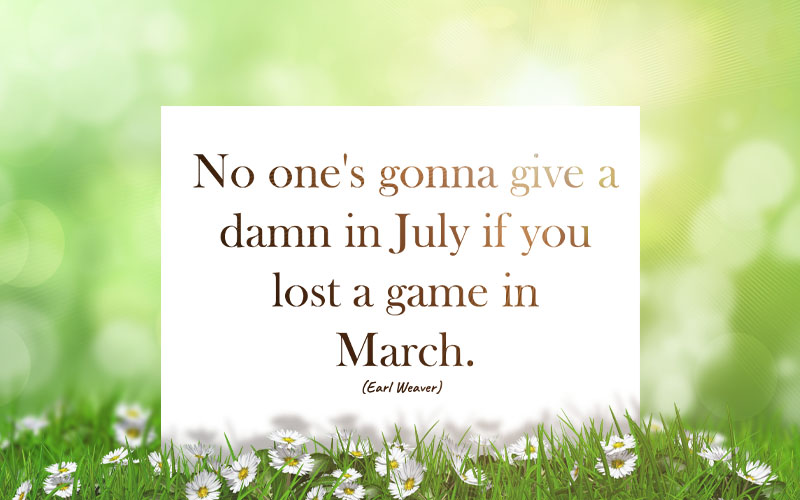 📜 “Don’t ever become a pessimist… a pessimist is correct oftener than an optimist, but an optimist has more fun, and neither can stop the march of events.” – Robert A. Heinlein

📜 “Even when there’s no one there for you march on / Even when the days are long for you March on / Like soldier.” – Joel Madeen

📜 “A windy March is lucky. Every pint of March dust brings a peck of September corn and a pound of October cotton.” – Julia Peterkin

📜 “In March winter is holding back and spring is pulling forward. Something holds, and something pulls inside of us too.” ―  Jean Hersey

📜 “You are reborn with the roses, in every spring.” ― Juan Ramón Jiménez

📜 “To welcome her the Spring breath’s forth Elysian sweets; March strews the Earth With violets and posies.” ―  Edmund Waller

📜 “I hope your decisions in life aren’t as ill-conceived as your March Madness bracket.” ― Unknown

Words for soul always give us a pathway to walk. They work as a light when you find yourself amid the darker nights.

Did you like our collection of March quotes? Select your favorite quote and engrave it on your favorite object using the engraving pen by Inspire Uplift.

Also, it would be great if you give us a good piece of thought before leaving this page.