Some fruits are mysterious.

Not because they look and taste different, like Jacote does, but they grow on trees that are in no way less than skyscrapers.

And unlike other fruits, the more they ripe, the drier their pulp becomes.

One such mysterious fruit is the baobab, which is famous for its dry white pulp.

Do you want to take an insight into this peculiar fruit?

Let us reveal seven facts about baobab fruit you didn’t know before.

1. Baobab Has Powder Instead of Pulp When Fully Riped

Baobab fruit is different from other fruits, as it does not contain pulp when fully ripened.

What is Baobab Fruit? 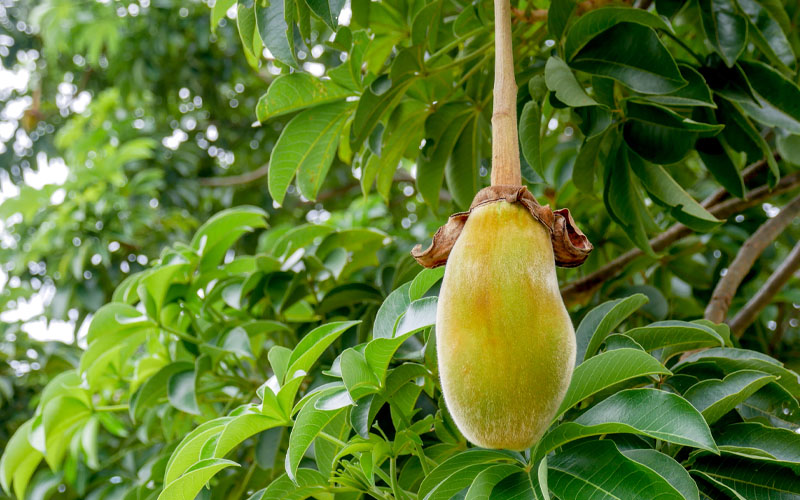 Baobab Fruit is an edible fruit from the trees of the Adansonia genus hanging from long thick stalks, green when unripe and turns brown when fully riped.

Its taste is a bit tangy and citrusy.

A fully riped baobab fruit has a light-brown shell inside which there are white cubes of powdery stuff entangled in red fibers.

The cubes are crushed and ground to make a fine powder.

The seeds inside are as small as a grain. Their shell is hard and needs to be hammered to get the kernel inside.

The Baobab tree fruit tastes a little bit like yogurt and a bit sour like a lemon. A few people also say it tastes like tamarind.

The seeds of baobab, according to some people, tastes like Brazil nuts.

The African Baobab fruit is cracked open to extract the dry white pulp entwined in red fibers, which is then ground to make powder.

This white powder is then used as a natural preservative, in addition to many other uses.

Baobab extracts are made from the leaves and white pulp of baobab fruit, which is then added to the beauty products. Like, Organic Baobab oil is considered ideal for cosmetic products due to its antioxidant content and high Omega 6-9 fatty acids.

2. Baobab Trees are Nothing Less Than Skyscrapers

Baobab trees are strange trees that are found in East African countries and Australia.

It has eight different species, of which Adansonia grandidieri are the tallest ones.

Baobab trees are known as the thickest, tallest and oldest trees, with few of them 28 meters high even.

These trees are also called upside-down trees because of their evenly spread roots-like branches on a straight trunk.

If you go to Madagascar deserts, at first sight, many baobab trees together will give you an illusion of a painting because of their sheer beauty and similar sizes.

Some baobab trees have flowers that grow once a year and open at night.

These white flowers have a 2.5-inch radius with filaments longer than myrtle flower but close to each other with orange ends.

Interestingly its flowers open at night.

Another interesting fact about the baobab trees is their long lifespans.

Carbon dating of a few of the trees in Madagascar indicated that they were more than 1600 years old even.

Another interesting fact is the mammoth trunk these trees have, which are sometimes hollow from the bottom as well.

Use of these hollow spaces for shops, prisons, a house, bus shelters is quite common in those countries.

An ancient hollow baobab tree in Zimbabwe is so big that it can accommodate 40 people inside it.

One baobab tree can store up to 30,000 gallons of water to survive in the drought and tough water conditions in the deserts of their native countries.

It’s usual for the locals to peel off their barks to sell it, which is then used to make liquor or to make fire charcoal.

Do you know: There’s a hollowed-out baobab tree called The Leper Tree in the East African country, Malawi, that was once used as a graveyard for the people who died of leprosy.

3. Baobab Fruit is the produce of Africa, Madagascar, and Australia

Native to Madagascar, Africa, and Australia, Baobab trees grow in a tropical and semi-tropical climate where there is minimal freezing temperature.

Of the eight different species found around these three regions, one is abundant in mainland Africa, six of them in Madagascar, and one in Australia.

But owing to Global Warming and locals’ need for fuel, these giant trees are dying at a faster pace.

Baobab Trees on the verge of collapse

Some of the oldest baobab trees in Africa have abruptly died in the past decade, due to climate change.

Dying of these giant trees raises another question.

If burning or removing their bark does not kill them, then why are they dying?

Well, the researchers have concluded that before they die, they rot from inside and suddenly collapse.

Baobab fruit is full of nutrients.

The white powdery stuff may look odd, but the nutrients it has can overcome any other fruit.

Most importantly, it’s rich in vitamin C, an immune booster vitamin, with as much as 10 times more than what is present in oranges.

6 times more potassium than bananas, and 2 times more calcium than in cow’s milk.

Let’s see the baobab nutrition facts in tabular form below.

A powder is made for the baobab fruit’s dry pulp, which is highly beneficial.

Let’s look at a few of the baobab powder benefits.

i. Its High Fiber Content Maintains a good Digestive System

As discussed above, baobab fruit powder is rich in fiber that helps in the proper functioning of the digestive system.

Also, fiber plays a vital role in preventing intestinal ulcers, piles, and any other inflammatory diseases of the digestive system.

Although dry and dehydrated yet baobab fruit is rich in polyphenols and antioxidants, just like the delicious tart cherry juice.

Antioxidants protect your body against free radicals, which otherwise would cause cancer and certain heart diseases. 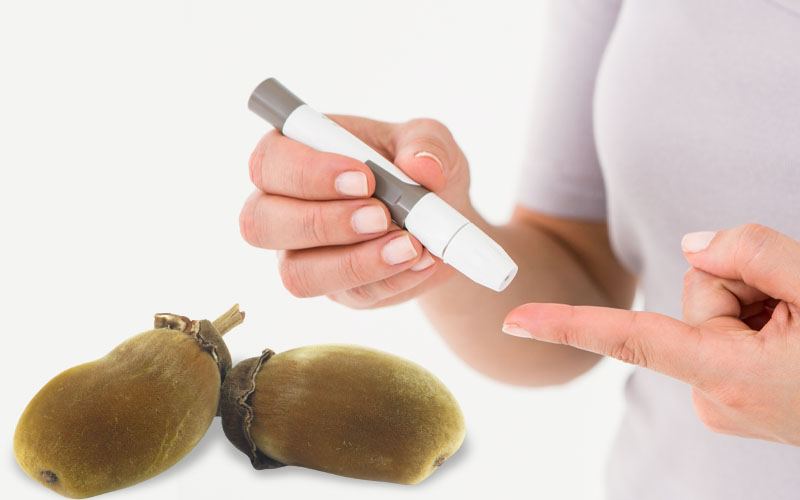 “Baobab is rich in fiber, which can slow down the rise in blood glucose, helping prevent sugar spikes.”

Babobob maintains a good blood sugar level because of the presence of fiber and polyphenols in it. 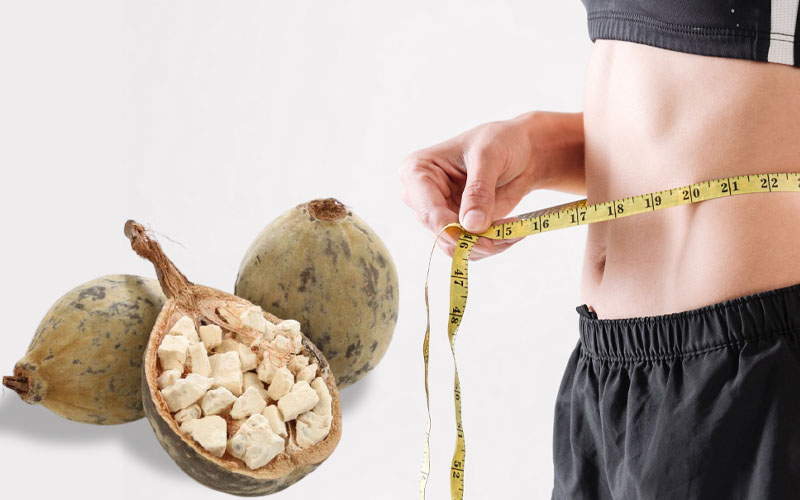 The presence of fiber in Baobab fruit is the core factor in the reduction of weight.

Fiber is said to delay the gastric emptying significantly and thus prolonging the time before one feels hungry.

According to another research, taking more fibers make us take fewer carbs, and resultantly, our weight is lost.

The obvious baobab benefit for women is that pregnant women may fulfill their vitamin C requirements from this single source.

Vitamin C is a hydro-soluble lactone that not only boosts the pregnant women’s immune system, reduces the risk of anemia, but also plays a vital role in the development of the baby.

6. Baobab Is Pollinated By Bats

Instead of bees or flies, species of fruit bats play a role in pollinating baobab trees.

There are multiple reasons for this.

First, the size of the flower enables the bats to stay and pollinate it.

Second, the flowers grow on long stalks at the end of branches, making it easy for the bats to reach.

The reason for this is the size of the flowers that provide enough room for the bats to stay and pollinate.

The time these trees take to mature used to be a discouraging factor for most of the farmers who wanted to grow it, for it took nearly 15-20 years to bear fruit.

But thanks to the latest grafting methods that have lessened this time to 5 years.

7. Baobab Is Used In Multiple Ways

Here comes a question of how much baobab powder a day we should consume?

Well, for the best results, it’s recommended to take 2-4 teaspoons (4-16g) of Baobab powder a day.

You may add it to your daily meal or simply mix it in any of your favorite beverages before drinking.

Taking too much of baobab fruit powder will provide an excessive amount of vitamin C.

And excessive intake of vitamin C, like more than 1000mg a day, may cause stomach pain, flatulence, diarrhea.

It’s because vitamin C can’t be stored by your body and has to be taken daily.

How To Grow a Baobab Tree From a Seed

Why? Because the germination rate of these seeds is quite low.

In a nutshell, growing it like other seeds does not work.

So here is how to grow the baobab tree at home.

Scratch the hard shell of the seeds and soak it in the water for 1-2 days.

Place the seeds in a moist towel or kitchen tissue for a couple of days, preferably in a container.

Mix coarse river sand with regular soil or cactus and put it in the pot with at least 10cm depth.

Gardening Tips: Always use gardening gloves before messing with the soil to protect against skin allergens

Sow the seeds in the soil mix and cover it with a thick 2cm layer of coarse river sand, and finally water it.

It needs regular water, but not too often. Watering twice or thrice a week is sufficient.

They need bright sunlight. So you may place it on the terrace, balcony, or garden.

Since its indigenous to the African deserts, the temperature should be high around it, like above 65°F.

Grown at the top mighty trees and dry from the inside, yet baobab fruits are rich in nutrients like no other fruit.

Not only the pulp, but the tiny seeds are edible as well.

The benefits of baobab powder to your diet can help you prevent heart diseases, improve the digestive system, lose weight, and maintain blood sugar levels.

Have you eaten baobab fruit hitherto? How was the taste then? Let us know in the comments section below.