So, you have got a killer suit already: ready-made or bespoke one. Your shirt fits perfectly on your shoulders; your shoes and your belt scream out their brand names. But, is that all you need?

Not at all. Instead, one critical piece is direly missing.

Yes, it’s the tie. In fact, men’s formal dressing is incomplete without ties.

What started as an integral part of men’s formal dress in the early 20th-century is more a style quotient now.

That’s why today, we’re going to discuss types of ties as we did in the case of different scarves and dress types in our previous blogs.

Types of Ties by Design

Ties by design mean the shape of a tie. In other words, is it hanging from the collar, wrapped around the collar, or covering one’s neck simply.

Let’s take a bird’s eye view of each of these types.

When we talk about ties, neckties roam our minds first.

Neckties are long ties tied under the collar of a shirt and hung on the front, along with their tails hidden at the back.

Usually, when we say a necktie, it’s a regular wide necktie, which is not slim.

Types of Neckties by Knot-style

It’s the most common type of knot that’s popular everywhere. It works with any kind of formal suiting, for it takes the least time to knot it.

It’s another simple yet loose form of tie-knot. Students are often seen in these kinds of knots while they wear their school ties. The apparent reason is the ease of tying and nothing else.

Sometimes it’s called full Windsor to avoid confusing it with a half-Windsor knot. Unlike the tie-knots mentioned above, this knot is triangular without having any drape on the front side.

The café knot is a bit stylish. It’s like a half-Windsor knot has been tightly covered with the shirt collar of the same fabric.

This is yet another stylish knot that’s difficult to wear. In this knot, the wider side of the tie makes the background, whereas the narrower one is shown at the front, and a bigger knot embeds the smaller one.

Eldredge is an executive style knot with too many wrapping in the knot with a single drape on the wide panel.

It’s just another version of Eldredge knot, except the knot is fluffy. Such a unique and stylish tie can be worn at one’s own wedding reception to get an artistic touch.

Four-rings tie is not very common among people, but it doesn’t stay behind when it comes to style. It looks like a loose knot in which the wider part remains on the backside.

It’s a funny type of knot that imitates an hourglass. If you want to look different at a party, then this knot is something you must try.

It can simply be called a loose version of the café knot because the collar-shaped coverings are too loose, giving it a baby elephant shape.

Onassis knot gives an incomplete knot, as the tie seems to be hanging from a string. It’s suitable for proms and casual occasions.

This is yet another stylish tie-knot, the shape of which resembles a pinwheel. The art in tying this knot is matching the inner patterns of the tie; otherwise, it won’t look like a pinwheel. It’s also fit for informal occasions only.

Trinity is a simple yet stylish knot in which the knot consists of three triangles with one corner of each triangle embedded into another. Again its complex shape does not make it suitable to be worn on highly formal occasions.

This is another funny knot that looks as if the tie is wrapped around in a spiral. It can be called a semi-formal, that can work in college or school parties. But again, for highly formal parties, it’s not recommended.

Are you one of those who always have a hard time tying a tie? If yes, watch the following video, which teaches it in an easy fashion.

Although skinny tie is a sub-type of a necktie, yet they are so popular that it’s better to mention them separately.

Skinny ties have a standard width between 1.5 to 2.5 inches and look best in the modern European cut suits.

Fashion Tip: The skinnier the tie, the more the skinny stature emphasized. 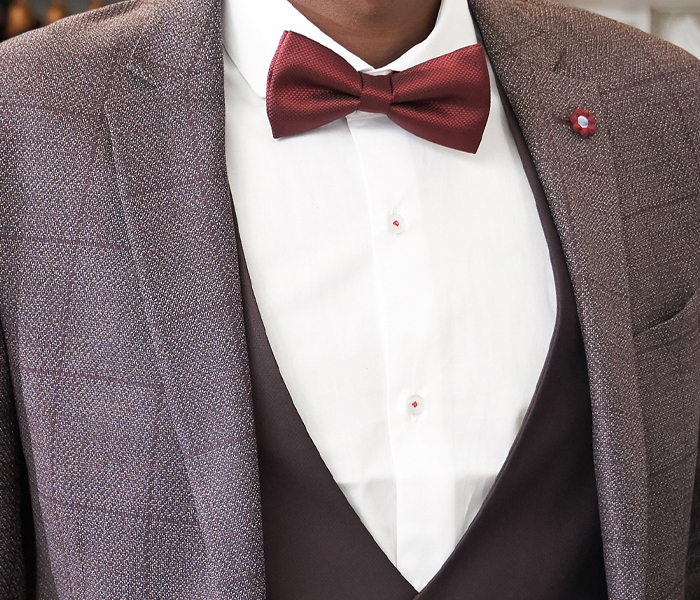 A bow tie is a type of tie that looks like a butterfly and tied like a shoelace.

Not every man likes to wear a bow tie, as it’s been more fantasized by the thrilling Bond films rather than seen at every formal party.

Today, bow ties have gone beyond being formal and professional to become a creative and fashion symbol.

Fun Facts: In the business world, a red bow tie symbolizes the reaffirmation of authority, strength, and dominance.

Let’s look at some of the types of bow ties that are trendy these days. 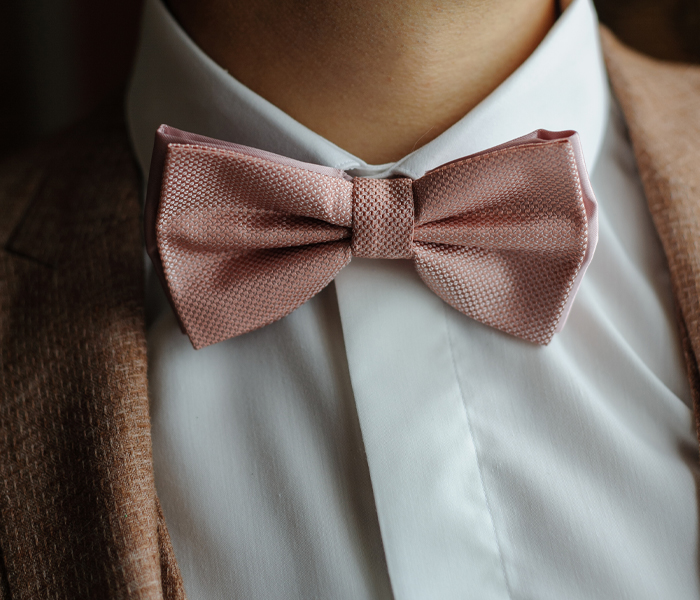 The butterfly bow is the most formal bow tie knot that makes an essential part of the tuxedo. It’s a simple and elegant knot that looks like a butterfly.

Batwing, as the name suggests, looks like the wings of a bat. In this knot, the overall look is made less wide by giving more drapes in the middle.

It’s considered less formal than the butterfly bow but can still work as formal wear.

The diamond knot gives an edgier look than the butterfly knot. It’s a kind of evergreen knot style, as celebrities of both past and current eras are often shown in this style.

It’s the slimmest bow tie of all. Like a skinny necktie, it’s more about the width of the fabric rather than the knot-style.

In other words, a skinny bow can adopt either a butterfly, batwing or diamond-point knot-styles. A skinny bow tie is about 2/3rd the width of a regular bow.

We can call this a combination of both necktie and bow tie. Let’s look at one of such ties.

It sounds a bit strange when it’s called a tie because the only thing it covers is the neck. Neither it hangs, nor it shows any knot like necktie and bows. It’s an informal tie that’s tied under the collar.

It’s a pair of strings or braided leather hanged like a necktie but with a decorative metal tip rather than a visible knot.

By definition, the cravat is the original form of a tie, from which bow and neckties evolved later. Unlike ascot, it’s more formal. It’s the style that King Louis XIV adopted from Croatian mercenaries.

It’s the only informal tie worn with either a formal shirt, T-shirt, or a top –  by both men and women.

Do You Know: The beautiful ties seen around flight attendants’ necks are actually scarfs tied like a neckerchief.

Types of Ties by Pattern

Tie patterns are endless, as each manufacturer tries to print a unique one on his product.

Sometimes, there’s symmetry in a pattern, and sometimes it’s merely an odd or weird pattern on the fabric.

These are the plain color ties with no pattern whatsoever. They make the simplest, most elegant formal dress code.

Checks or boxes with striped lines sometimes are a part of this pattern, which looks elegant when matched with a suit made of either of the colors forming this tie.

Novelty ties are the ones that have depictions of some real or virtual objects, including a flag pattern, an animal, galaxy, cars, etc.

Ties under this type have diagonal stripes on them.

As the name suggests, this pattern follows some geometric shapes, like squares, rectangles, triangles, etc.

It has a teardrop-shaped motif with a curved upper end. It’s still seen in Britain and other English-speaking countries on men’s ties, waistcoats, and handkerchiefs.

Floral ties are made of fabrics with flower-like patterns printed on them, just like the one below.

Types of Ties by Material

Ties can also be classified according to the types of fabrics they are made with, making a tie cheap or high-end.

Let’s look at some of the ties made with different fabrics.

Knit ties are expensive to buy because most of them are hand-made fabrics. Unlike other ties, they need to be washed carefully, like handwash, etc. Ideally, they are considered less than formal, be worn with blazers at a wedding or an evening out.

The good thing about silk tie is that it keeps shining and is visible from far. It makes a nice formal tie that easily available at every tie store.

Microfiber is a synthetic fiber made from a polyester and polyamide blend. Polyfiber fabrics are mainly used in cleaning stuff, but the ties it makes are elegant and worth wearing made for formal wear.

Since cotton is lightweight, the cotton ties are comfortable to wear in the spring or summer. It makes semi-formal wear.

Polyester ties are the cheapest ones with an additional benefit that the stains are easily removed from them.

The best thing about such fabrics is that it sits off a bit from other surfaces, like your shirt, giving you comfort, increased air circulation, and breathability. So, it’s perfect for the spring and summer seasons.

Type of Ties for Wedding

Your wedding reception is the most important event of your life, where you and your wife are the stars of the day with every eye turned at you.

Where you try your best to search for the most stylish suit, you need a tie that makes the perfect match.

Let us show you some of the popular types of ties for a wedding in 2023.

There are so many types of ties today that choosing one for your dress code often becomes confusing. With differences concerning material, design, patterns, and knot styles, the combinations are hundreds.

Whatever tie you like, one thing is for sure: a gentleman’s look at a formal event is incomplete without a tie.

Which of these ties you think are the most stylish? What tie you wore or planning to wear at your wedding reception, and why? Let us know by leaving your comments in the comment section below.