Poodles and their offsprings are all adorable, for they are cute little dogs that are more a beauty pageant rather than dogs who bark and guard.

One such social butterfly of dogs is called Spoodle, which is a hybrid of a cocker spaniel and a poodle.

Intelligent, a great family dog, playful nature, and whatnot describe this adorable dog.

Let’s dive deep to know everything about this great dog.

1. Spoodle is Yet Another Poodle Cross 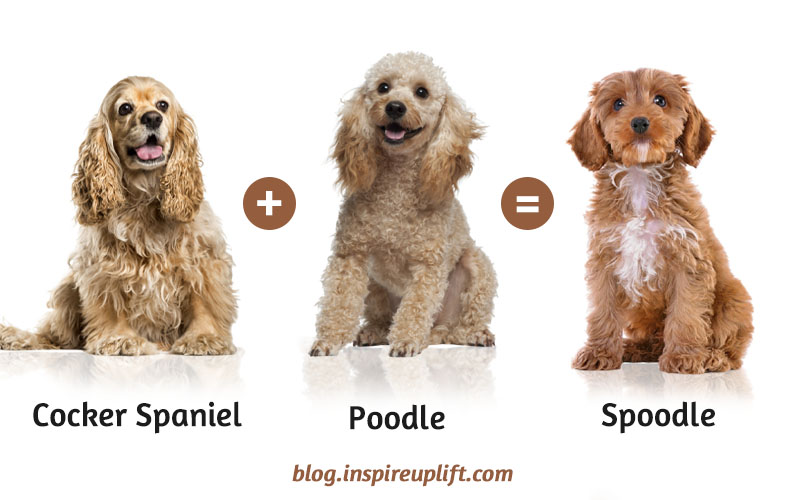 Just like other hybrids parented by Poodles, Spoodle is another lovely and affectionate hybrid.

It was first bred by designer dog breeders in the United States in the 1960s with the objective of developing a hybrid that is free from the diseases found in their parent breeds.

Now, let’s talk about how does Spoodle looks like.

Spoodle or Cockapoo is a hybrid of a Cocker Spaniel and a Miniature Poodle. Cocker spaniel may vary from an English to an American spaniel.

In other words, a Spoodle is a small dog having shaggy to wavy hair like poodles, large bright eyes, long droopy ears, and a muzzle resembling that of a cocker spaniel.

The average weight and height of a Spoodle lie between 11-30 lbs and 10-15 inches, respectively.

The coat type depends upon the type of the parent cocker spaniel.

A cross between an F1 American Cocker Spaniel and a miniature poodle will result in a Spoodle with a tight curly coat.

A Spoodle from the cross of an English Show Cocker Spaniel and a miniature poodle will have a loose wavy coat.

And if the mating dogs are F1 Working Cocker Spaniel and a Miniature poodle, it will result in a Spoodle with a straight coat.

People are also curious that at what age do Spoodles become fully grown? Or when do they stop growing?

Well, it depends upon the type of poodle that’s crossed with the cocker spaniel.

If a miniature poodle is used, the resulting Spoodle will reach its maximum size in 6 months, whereas an offspring from a large poodle cross takes 9-12 months to grow fully.

Your Spoodle’s food may not be heavy on your pocket, but its grooming is.

The grooming is necessary because sometimes, the thick fur grows irregularly, which sometimes covers the poor pet’s face even.

You need to go to a professional pet groomer every 30-45 days, as having the grooming gloves is just not enough in this dog’s case.

But what you can do yourself is regular combing and brushing.

A good thing about Spoodle is, it’s a hypoallergenic dog.

In other words, even if you groom it less, it won’t shed and will be tolerable by allergic people, like many other hypoallergenic dogs.

The Spoodle’s ears also get infected early if not cleaned frequently, which we will discuss later in the diseases section.

Interestingly, teeth are another aspect that is prone to damage if due care is not taken.

Most dogs show signs of canine periodontal disease at the age of just three.

The reason it doesn’t get noticed is that owners ignore the bad breath of dogs, considering it normal. The same is the case with Spoodles.

Their teeth get plaque if not cleaned regularly, which leads to gingivitis and, ultimately, to periodontitis if left untreated.

So how can you keep your Spoodle’s teeth safe?

A dog’s toothbrush toy can work well here, which is both a fun and a regular cleaning tool for your dog.

Fun Fact
The famous animated TV series for kids, PAW Patrol, has a cute female spoodle in the name of Skye as well, who is responsible for emergencies.

3. Spoodle Is a Happy, Intelligent and Gentle Dog

The behavior of Spoodle resembles with its half brother, Schnoodle.

Spoodle is an affectionate and lively dog that is much more social than any other dog.

Unlike coydogs, they are not aggressive, but they do bark at strangers –making them excellent guard dogs.

If socialized from a young age, they become very friendly with other dogs and cats.

New situations are not that new for this furry friend of yours, as it adapts itself to the new circumstances easily.

Its sheer intelligence is what differentiates it from other breeds, thanks to its parents, Poodle and Cocker Spaniel, who are both intelligent, loyal, and affectionate.

Not only adults but children enjoy equally well with these dogs. They can play for hours at a stretch without getting tired, like picking up the thrown ball, etc

The children can climb all over them, and they won’t flinch.

Another interesting thing is their love for the water. So, it’s not surprising when you see them jumping into your pool whenever he watches you do the same.

Yes, because they are gentle, easy to train, and happy dogs.

But their endless energy and frequent grooming needs are a bit difficult to cope with if you haven’t had a dog before.

4. Spoodle Is Nothing Less Than an Athlete

Walking them to your nearest park and playing like crazy with them is what they need.

That’s why people often ask if they can keep a Spoodle in a small flat. The answer is yes, but you have to compensate for its confinement with equal exercise.

The fact that the Poodle hybrids are much intelligent makes it easier for us to train them.

For example, if you teach him not to bark when the doorbell rings, you’ll notice this change pretty soon.

Here’s how intelligent they are. It’s an inspiration for you if you bring a Spoodle puppy home.

As discussed earlier, the primary purpose of any unprecedented cross between different dog breeds is to optimize the best features of each parent.

There are certain health issues that your furry buddy may get into. Let’s take a look at each of them.

i. Otitis ( an ear infection)

Spoodles are more susceptible to ear infections than other dogs due to their floppy ears.

It’s the ear canal that gets affected due to allergies, infections, or by some parasite.

The irritation, when increases, lead to a condition called Otitis that will make your dog shake his head vigorously, flap, and scratch his ears.

If you notice the above symptoms in your pet, consult your nearest vet.

The vet will start the treatment and give anti-inflammatory and antiparasitic drugs to prevent further spreading of the condition towards the inner ear.

It’s the disease in which the lens of the Spoodle becomes opaque, and the poor dog is not able to focus while seeing.

Unfortunately, it’s not restricted to just one eye. Instead, once one eye is infected, the other one gets infected too.

Even worse is the fact that the pet getting infected from cataracts can catch lens luxation as well, which is the displacement of the lens itself.

Depending upon the severity of the condition, your vet would suggest vitamin supplements and nutraceuticals or as a last resort, surgically replace the lens with a plastic one.

Patellar luxation is the permanent or temporary dislocation of the knee and is quite common in smaller dogs.

In some cases, patellar luxation gets transferred from the affected parent to the offspring.

In extreme cases, the disease sometimes leads to arthritis.

According to the Orthopedic Foundation for Animals, the cocker spaniel is the third most affected breed in patellar luxation.

So, the chances of hereditary transfer of this disease from a cocker spaniel to the Spoodle increases.

6. Spoodle Can be Awesome if Purchased The Right Way

Here are some tips that will let you bring a healthy puppy to your home.

Spoodle or cockapoo is the result of the cross between a cocker spaniel and a miniature poodle. They are the friendliest dogs ever. Their small size and loving nature make them great for those who are a bit nervous around the dogs. They are easy to train because of their intelligence.

Do you own a Spoodle? How is your experience so far? Please share it with us in the comments section below.