“Every dog has its day”

Not using it in a bad sense.

In fact, we are here to discuss a real dog today who will make your day.

It’s not an ordinary dog breed. Instead, it’s one of the most beautiful hybrids ever seen.

It’s short, it’s cute, and it’s everything. So which dog breed is it?

A dog you would love to have in your home. So, let’s get to know more about this beautiful toy-like dog.

1. What is a Schnoodle? What’s a Schnauzer-Poodle mix? 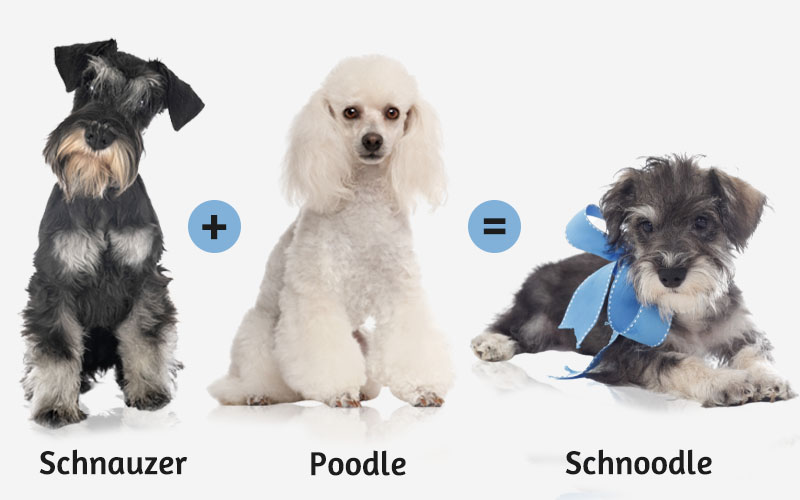 Schnoodle is a dog hybrid that’s a cross between a poodle and a schnauzer, usually small like a toy, having whiskers like its parent, schnauzer, and thick fur.

The history of Schnoodle is not very old, like of coydogs. Instead, it’s hardly four decades old. In the early 1980s, poodle mixes were gaining popularity, the objective of which was to create a low-dander family dog, and not surprisingly, today, it’s one of the most demanding breeds ever.

The coat of a Schnoodle resembles a schnauzer puppy’s; that is, the coat is wavy and soft. It is neither wiry like an adult schnauzer’s nor has tight curls like a poodle’s. The average height can be taken as 15 inches and weight as 30 pounds, depending upon the Schnoodle type.

Their life span is between 10-15 years. Larger Schnoodle tend to live a bit shorter than the short Schnoodles.

The muzzle is covered with hair looking like a beard, the way his parent schnauzer has, and eyes most of the time are covered in the hair. The ears resemble poodles but ain’t too big.

Like other things, the coat of a Schnoodle depends upon the type of its parents. It can vary from being wiry like a schnauzer or soft curly like poodle’s, or simply a mixture of both.

But one thing is for sure,

The coat would be hair-like in all cases with low-shedding and low dander features.

Their coat color varies from white, apricot, black, gray, to silver, brown, etc. Interestingly, Schnoodle change the color of their coats throughout their life.

iii. Height and Weight of Schnoodle

Again, the height and weight of a Schnoodle depend upon the parents. A rule of thumb is, the bigger the parent, the higher the chances of a bigger Schnoodle.

The following table may help us understand the weight and height of different breeds of Schnoodle dogs depending on who their parents were.

Have a look at the Schnoodle pictures of the above breeds below.

3. The behavior of the Schnoodle

He enjoys having fun with his companions and is a good protector of his family.

The Moore Police Department in October 2020 inducted a Schnoodle as a therapy dog to serve the Moore community internally.

Let’s look at his behavior from different aspects:

i. Is Schnoodle a Lapdog or Active in Playing?

Intelligence and playful nature rarely coexist in humans, but in Schnoodle, it does.

Schnoodle loves to play like crazy. Even after a long walk, they won’t be contented if you don’t play with them.

He loves to do ‘butt tucks’ (running in a circle with his back down).

ii. How’s the temperament of Schnoodle?

Is Schnoodle a good family dog?

Yes, Schnoodle are known for their intelligence and cheerfulness, better known as ‘always happy’ dogs. They love to play and hang out with their family.

It’s an excellent watchdog, a property inherited from his parent, schnauzer. On the other hand, he’s affectionate, smart, and agile as well, thanks to his parent poodle.

Talking about their affectionate nature, we can bluntly say they score highly in this department. If you train them well from a young age, they would be your best companions.

An expression of their affection will be in the form of cuddles, face licks, and much more. In other words, they are not aggressive at all.

Sometimes you may notice your Schnoodle shaking, which is a sign of nervousness or stress. The reason might be a new home, dealing with new people or any situation which he’s not used to.

Do you want to see yourself what this dog is and how it behaves? If yes, take a look at the following video, and you won’t stop praising this dog.

A similar name called Snickerdoodle exists too, but surprisingly not for the dog. Instead, it’s a cookie made with cream of tartar along with other ingredients.

4. Common Problems with Schnoodle and Their Solutions

i. Too much barking

People often complain that their Schnoodle bark too much at passersby, be it animals or humans, and blocking their view, distracting them, scolding them do not work even.

Excessive licking can either be because of behavioral or medical reasons.

If it’s behavioral, it’s because they like the salty taste of the skin and do this as a habit and out of boredom.

On the other hand, medical reasons might be infections, allergies, underlying pain, or gastrointestinal issue.

For behavioral reasons, the solution is to avoid punishing your dog and engage him in alternative activities or simply reward him when he stops doing that.

For medical reasons, it’s better to consult your vet.

iii. Schnoodle Peeing in the house

Some Schnoodle even pee on the carpets and other places inside the house. (Always use the absorption puppy pad to keep your house clean)

If that’s occasional, then it might be an indication of a lack of training. Or, if the problem persists, you should consult a veterinarian.

Let’s take an overview of the best practices to take care of your Schnoodle.

i. When should you start training your Schnoodle?

As per experts’ advice, don’t wait for your Schnoodle to grow old and then start training. Rather, start as early as six months old.

Take him for daily walks, hiking; let him do the fetching and all other activities that require running, jumping, chasing, etc.

If you don’t socialize these dogs with neighboring dogs, children, and adults, you may end up making him a bit aggressive, which means chewing clothes, shoes, or whatever he comes across.

A motivational thing to encourage you to spend time with your Schnoodle can be purchasing a best friends’ necklace.

What can be better than this necklace?

Schnoodle takes the lead when it comes to exercise. Take him out with your morning walk, daily jogging, ball fetching, tug of war, etc., and you will see he enjoys all these with the same enthusiasm as if he’s doing it for the first time.

Schnoodle requires about 30-60 minutes of exercise daily, as both of its parents tend to be active and playful.

Lesser exercise means frustrating behaviors that are then witnessed in your household items getting chewed beyond repair.

Now you have got your cute little Schnoodle and want to know how to groom it to make it even more beautiful and clean than ever.

Whether you have a toy Schnoodle or a Giant Schnoodle, one feature is the same for all of them; they require grooming. So, let’s take an overview of the areas to groom and how to do that.

Bathing, of course, helps in cleaning the coat, but a Schnoodle coat needs something more in grooming in addition to removing loose hair.

A pair of pet grooming gloves will come in handy – it does not only removes the about-to-shed hairs but would give him a soothing massage as well. Alternatively, use a pet vacuum to pull out excessive dust and mess from the fur.

Schnoodle need regular bathing, too, at least once or twice a month. Washing and scrubbing his coat at the same time would be great, as it would clean the skin thoroughly. Here, a pet hose scrubber can be extremely helpful.

How often do you clean your teeth?

Once, twice a day?

Doesn’t your lovely dog deserve half of that amount?

You should brush your Schnoodle teeth 3-4 times a week to keep his dental health good. If you can do it even more frequently, that’s a better thing.

Cut the extra hairs that hinder his visibility, and don’t forget to wash his face daily to wipe off the tear marks, especially when the coat color is light.

The following video may better explain how to trim Schnoodle hair on the face. 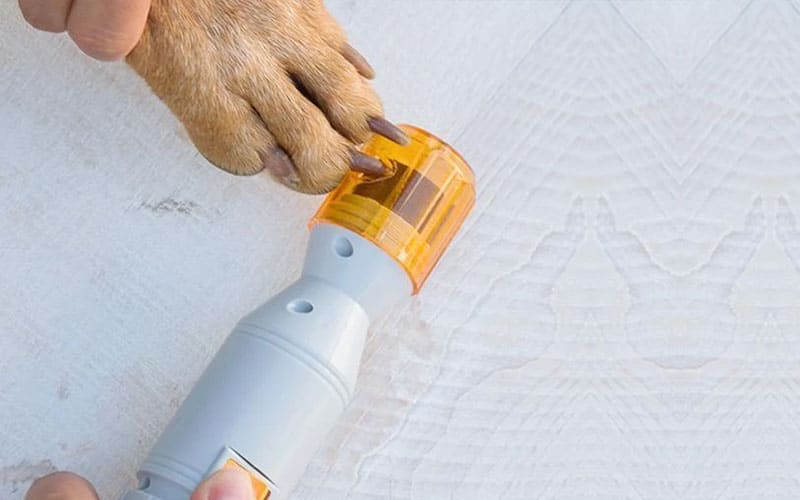 Cutting your dog’s nails once a month is fine or when you hear his nail-scratch against the floor.

Just like Cavoodle, Schnoodle tend to catch diseases less often than other dogs – another reason why people prefer Schnoodle to be their pet.

However, there are certain diseases that Schnoodle may sometimes contract over time.

Patella is the scientific term for knee cap. So, Patellar Luxation (dislocation) is a condition in Schnoodle where the knee cap rides outside the femoral groove when the knee is flexed.

It can either be lateral or medial, depending on if the dislocation of the knee cap is inner or outer.

Not all patellar luxation require surgery. Proper evaluation is needed before a decision can be made.

Schnoodle usually inherit skin problems from either of their parent; schnauzer or poodle.

They might have dry tender, itchy skin, especially in reaction to low-quality grooming products.

Yes, like other breeds of a poodle, they are labeled for being hypoallergenic. Still, if you’re highly sensitive, it’s recommended to clean fallen pet hairs immediately with a cleaner.

It’s advisable to use quality accessories for dogs.

Feed your dog with a sensitive skin formula diet. It’s a diet that’s rich in omega-3 and omega-6 fatty acids that moisturizes its skin.

If an allergy causes sensitive skin, provide a hypoallergenic diet like a duck, lamb, venison, or salmon instead of chicken or beef.

Hip dysplasia is one of the common diseases in dogs. It happens because of poor breeding practices. Not all Schnoodle develop this disease, but they are at higher risk of catching it.

A few of the non-surgical treatments are to reduce weight, wearing a hip support brace, medications.

And of course, if the above does not work, the little Schnoodle with have to undergo surgery, like Femoral Head Osteotomy (FHO) or others.

Also known as aseptic necrosis of the femoral head, it’s the disease in which the head of the femur begins to degenerate, which over time, results in arthritis.

The reason for this is the disrupted blood flow towards the femur.

Signs of leg-calve-perthes include limping, which gradually develops into a stage where the dog can’t put its weight on the affected leg anymore.

You Schnoodle have to undergo surgery, because no other solution is viable.

It’s a group of genetic diseases observed in certain breeds of dogs, similar to pigmentosa in humans.

In this disease, the retina of the dog tends to regenerate, causing vision loss.

It’s a hereditary disease that unfortunately, has no treatment.

7. A brief about the Cute Schnoodle Puppies (Buying Tips)

Schnoodle puppies are sold at an average price of $1500 to $2400 in the US, depending upon the age. The range starts for as young as one week old puppy to as old as eight weeks.

Before buying any puppy, make sure it’s vaccinated and is dewormed well.

Make sure both puppy’s father and mother are registered from the relevant authorities and associations, like the Affordable Care Act (ACA), American Kennel Club (AKC), etc.

Ask if the seller will get your puppy registered with AKC Canine Partners.

Take a glance at one of the Schnoodle dogs in the following video, and you will be amazed by their beauty.

There’s no reason why you shouldn’t keep a Schnoodle at your home. Beauty, affection, friendship are a few of the hallmarks that undermine their downside features like excessive barking.

Caring and grooming are easier than any other dog’s. The only thing it requires is early training and excessive exercise.

Do you own a Schnoodle? Does it behave like what has been described above? Share your experience with Schnoodle, including some interesting facts, in the comments section below.