Keeping houseplants is a great way of turning around a bad hair day.

In fact, studies have confirmed that it improves productivity by up to 15% and boosts your mood (NBCNews).

You can have the long-leaved snake plant, the charming, easy-to-care succulents like jade plant and panda plant.

Or the variegated and showy Dieffenbachia plant, also known as Dumb Cane.

Well, this is the plant we will be talking about today.

So, let’s get rolling!

1. Why Should We Consider Growing Dieffenbachia?

Why are we having a separate blog on this summer growing plant?

Because it has numerous advantages.

First, it is easy to take care of. Even if you are a new gardener, you can grow it easily by following simple considerations.

Second, it is readily available in the market at affordable rates. Not as scarce as hen’s teeth like the Resurrection Plant of Jericho, or available in a number of false plant copies like Monstera Obliqua.

Third, it creates an adorable tropical look into your room due to its lush foliage and thick mature stems.

We have divided the blog into tangible points so it is easily understood and swiped by people of all understanding. You can only read the point you want to.

There are many varieties of this plant in the market. Generally, all of them have variegated leaves – light or dark green colored mixed with marks, spots, spatters, or blotches of lime, yellow, and light green hue.

Some also may have strips in them. The shape of the leaves is elliptic-oblong and they may have lateral veins anywhere between 8 to 20. 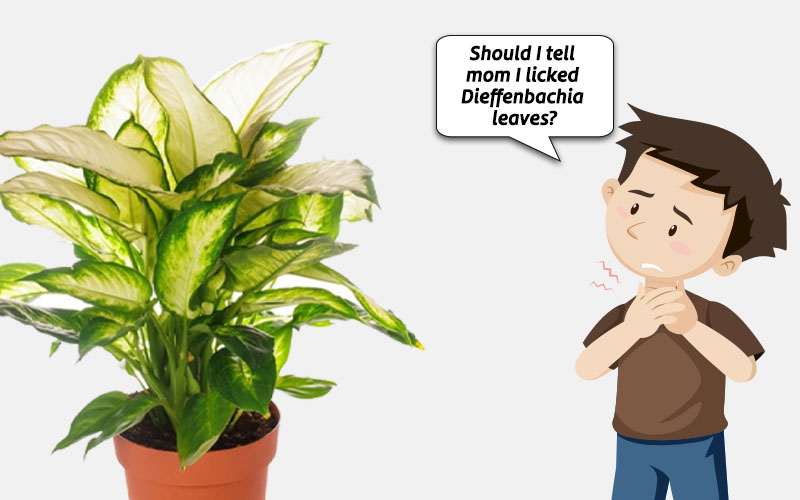 Now, why is Dieffenbachia called the Dumb Cane?

That’s because it is poisonous.

There are plenty of microscopic crystals of calcium oxalate on every part of the plant which, if consumed, can irritate the mucous membranes and cause swelling of the throat and tongue which results in speechlessness.

This is temporary but it sure happens. Almost all the parts of the plant are harmful especially the stalk. So, this plant should be kept away from nosy dogs, cats, and kids.

Dieffenbachia is the second most common plant exposure that gets treated in American poison control centers.

In case it has been ingested, there are some quick tips to treat it:

Here are the point-wise growing and care instructions.

Now, Dumb Cane is a houseplant but not a low-light succulent like Jade Plant, Alovera & Elephant Bush.

This plant’s ideal placement is by the window that receives bright light around 4-6 hours a day. It needs filtered/diffused light but can also do fine in a shady spot outdoors.

One mistake that people make is to keep only one side of the plant directed towards the sun, making the other sides leggy and underdeveloped. Rotation of the pot is important.

2. The soil needs to be well-drained

Well, that is a given, right. At least with the majority of houseplants.

Highly compact soil doesn’t allow the roots to reach for water and oxygen easily so the soil should be well-drained and well-aerated.

One great combination is 60% peat moss, 20% compost, 20% perlite. They hate soggy soil and will develop root rot as a result. Prepare the soil mixture in a mess-free gardening mat.

3. Watering is different for winters & summers

In Summers, Dumb Cane doesn’t like to be dried out because it is a summer-growing plant. If you don’t give enough water, you are troubling its growing cycle. Water twice or thrice a week.

In Winters, you would want to have the top 2 inches of the soil dried out before watering it. That’s pretty much the defining line!

Overwatering will cause root rot that will result in the yellowing of leaves that will eventually kill them.

4. It likes a warm & humid environment

They perform the best in between the temperature range of 65-75 degrees Fahrenheit. Anything below 60 degrees will result in a leggy appearance.

Tropical varieties can do well in temperatures above 75 degrees even. They also shouldn’t be exposed to cold droughts because they are sensitive to them.

Another thing is the humidity; they love humid environments and will thrive in 60% humidity the best. Mist them regularly in summers or have a tray of pebbles filled with water under the pot. A tiny humidifier would also suffice.

5. What about the fertilizing needs?

At a younger age, they need more fertilizing because the root system hasn’t been developed enough. Add diluted liquid fertilizer with every watering, although that depends on the plant type.

Once they have matured, follow a routine of adding a 20-20-20 diluted fertilizer after every 6 weeks for good results.

5. Dieffenbachia Varieties – How Many Are There?

Although there are more than 15 varieties of this plant, here are 4 easily available variants.

Characterized by broad green leaves with dark green bordering and yellow-green colored center, the leaves are wavy and almost identical to each other. The stem is clear.

The distinctive feature of this type is the cane stem that is pretty much symbolic to the Dieffenbachia plant. It’s the most common type and has large, ovular leaves with dark green edging and light green variegation in the center.

The leaves are arrow-shaped and the degree of central light-colored variegation is greater than the previous two varieties. The variegation is more speckled and spotty than the others as well. It also has a cane-like stem, though not as pronounced as the Seguine.

It has dark green leaves blotted with white, yellow, and green marks all over them.

There are two widely used ways of propagating Dieffenbachia.

Take a stalk bearing 2-3 leaves in this case and put them in the beaker or container of water. Replicate this step for 3-4 containers to increase the success rate.

You have to keep the water in bright, indirect light for 7-8 hours a day or outdoors in a shady region.

Wait till the roots began to grow. It would generally take 20-30 days after which you can repot them in a separate pot.

When & How to repot a Dieffenbachia?

When the stem gets hidden from the leaves, it’s time to repot. The best time to repot is Spring so that the plant can have enough time to acclimatize with the new potting mixture.

Strike the pot’s sides with a metallic object and transfer the plant with the whole soil into a larger pot.

We will discuss the stem cutting method here.

Before cutting the stem into parts, make sure that the pruner or knife you are using is sterilized with alcohol.

Cut the stem into equal parts of 2-2.5 inches. Make sure there are at least 2 rings on the cut stem pieces.

Add liquid rooting hormone with gardening mix and fill the pot. Ensure that the upper side of the stem should be pointing upwards and the lower side downwards. Put them 1 inch deep in the soil.

Water the soil on alternate days and keep them in bright, indirect light or a shady spot outdoors.

Depending on the variety and the weather conditions, new leaves will grow in 2-3 months from each stem.

You can also bury the stems horizontally with eyes pointing upwards. New branches will come out of the eyes.

7. Problems with the Dumb Cane

No plant is resistant to everything. Dieffenbachia has got problems as well but not very specific ones, though.

Cause: Overwatering. This plant doesn’t like to be watered frequently.

Solution: As we discussed above, water it twice or thrice a week in Summers and once the top 2 inches of soil have dried in Winters.

Causes: The three main causes of brown leaves in Diefenbachia are excess fertilizing, uneven watering, and bad quality of water.

Solution: Regulate your watering cycle, don’t use water that contains chemicals, and reduce the frequency of adding fertilizers. We told you about the fertilizing procedure before.

Also, remove the brown leaves from the rest of the plant.

Solution: Depending on the type of pest, treat it and remove the affected leaves. In case the temperature has changed rapidly, try to replicate the previous environment as soon as possible.

4. Brown or black spots on leaves, meshy webbed or cotton  structures on the leaves

Solution: If spots have appeared on the leaves, it’s because of fungus so you need to put them in bright light and reduce water intake.

Webbed structures are caused by spider mites. You can either take the plant outside and spray it with a forceful supply of water or wipe the leaves with insecticidal soap.

The cotton masses on the underside of the leaves are caused by mealybugs. There are three ways;

Second, wipe the underside of the leaves with a cloth soaked in rubbing alcohol.

Third, treat the leaves with sprays of diluted neem oil as it acts as a natural insecticide.

See, it wasn’t that hard to grow this plant :p

If you still have any questions about this plant, do let us know in the comment section.