Melons are really hard to know, rightly said by the great American polymath, Benjamin, in the above quote.

This holds true from both aspects.

Firstly, the beautiful looking melon may not be perfect inside.

Secondly, today, there are so many existing melon varieties that it’s hard to tell which one belongs to which genus and so on.

So, why not make this easy once and for all.

Let’s categorize the popular melon varieties in the easiest way possible in this blog.

How many types of melons are there in the world?

Botanically, melons belong to the family Cucurbitaceae, with three genera, Benincasa, Cucumis, and Citrullus. From each of these genera, we have tens of species further.

The species falling in this genus are just two, including the world’s most popular melon, named watermelon, and another one known as the citron melon.

Let’s get to know both of these in detail. 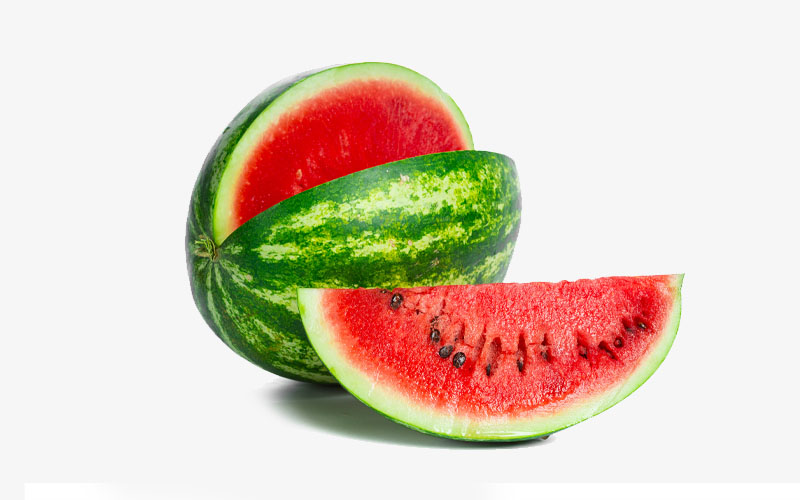 There are 50+ varieties of melons differing in color, size, and shape. But almost all of them have a similar type of flesh and taste.

This sweetest melon is eaten raw after cutting into slices and is loved worldwide for its water content that keeps you hydrated in the summer.

Watermelon has the most sugar content among all the melons, with 18g of sugar in just one average-sized wedge.

Its history is as old as 5000 years, where little water in Africa’s deserts made it extremely important for its extraordinary ability to store water.

It can be called a relative of watermelon, as the fruit is almost similar from outside. But the main difference is, unlike watermelon, it can’t be simply sliced and eaten raw. They are mainly used as preservatives for having plenty of pectin in them.

There’s only one member in this family called winter melon, discussed below. 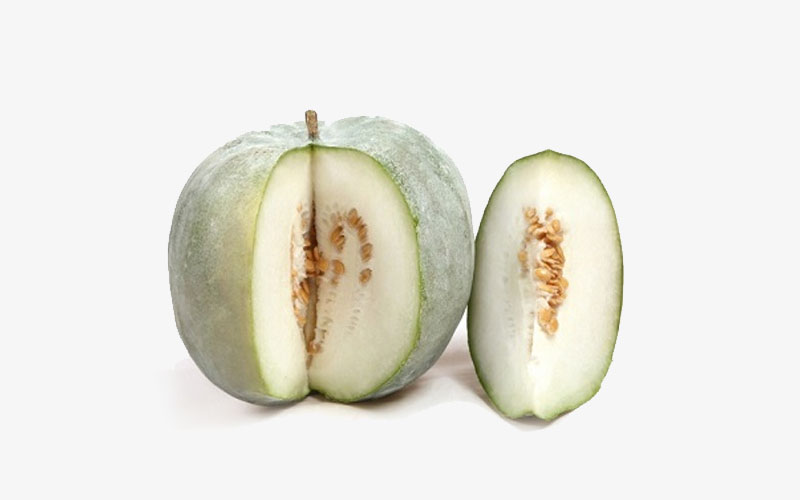 Mainly used as a vegetable, Winter gourd is also used in stews, stir-fried dishes, and soups. Since it has a mild taste, it’s cooked with strong-flavored items like chicken to get a richer flavor.

In countries like the Indian subcontinent, it’s known for boosting energy levels and improving digestion.

Melons in the genus Cucumin are all culinary fruits and include melons we eat as a fruit in our daily life, including horned melon and different muskmelons, mentioned below. 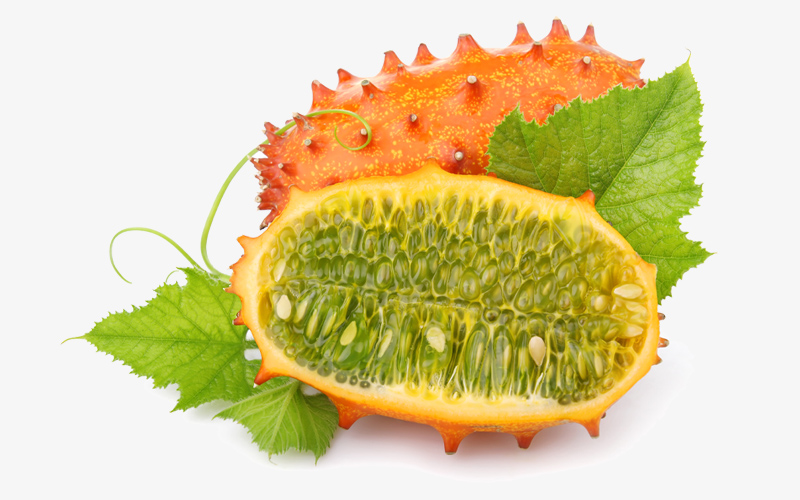 It’s mainly grown in Newzealand and the US.

The jelly-like flesh has seeds that are edible too. But the peel is completely inedible.

Now to the Muskmelons.

Scientifically the muskmelon is called Cucumis melo, followed by the particular variety name.

Most of the melons types we eat as fruit are muskmelons and are generally called large melons. So, let’s discuss them in detail. 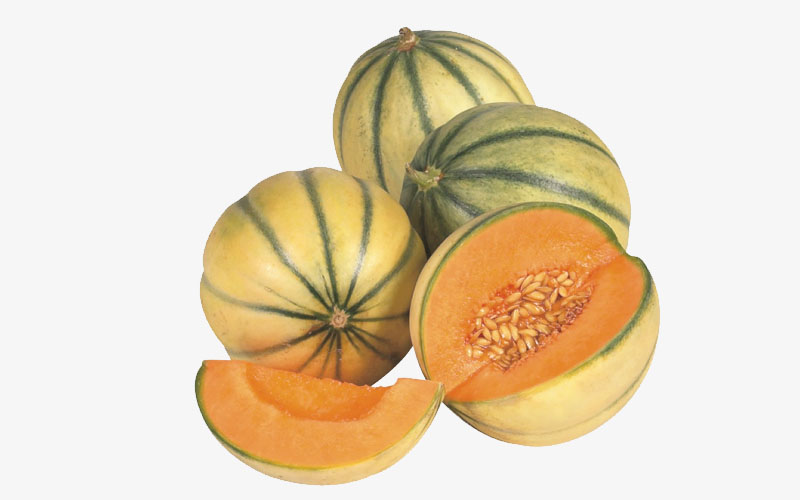 What is an orange melon called?

Cantaloupes are called orange melons for having juicy, sweet orange flesh. They are named after a small town named Canalupa, which is located near Rome.

European cantaloupes are, in fact, true cantaloupes: different from what Americans think of them.

Cantaloupe is extremely beneficial for having antioxidants and almost 100% of the daily recommended vitamin C value – a vitamin that’s an immune booster.

They, too, are sliced before serving. 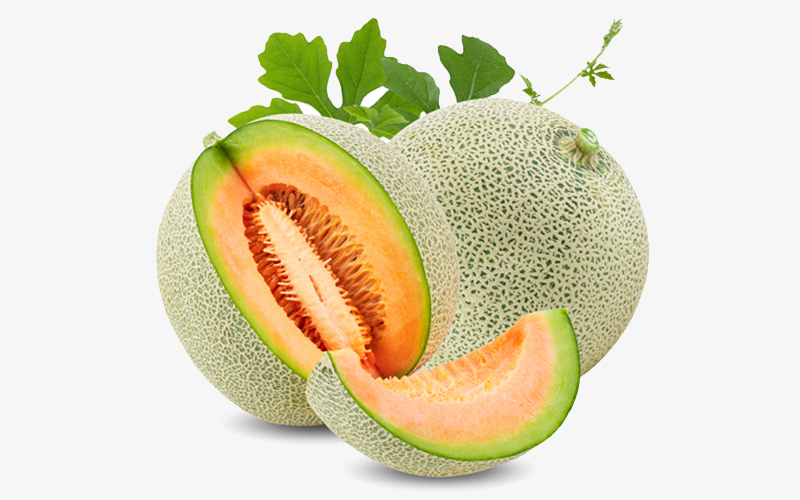 This melon is common in the United States, Mexico, and some parts of Canada. It’s a muskmelon with a net-like rind. It’s eaten as fruit like other muskmelons.

Calfornia is the largest American state that produces these cantaloupes.

The common name for this melon in Southeast Asia is Sarda. It’s a cross between the netted-skin melon, Krimka, and the green-flesh melon, Ha-Ogen.

It’s also eaten as a fruit. 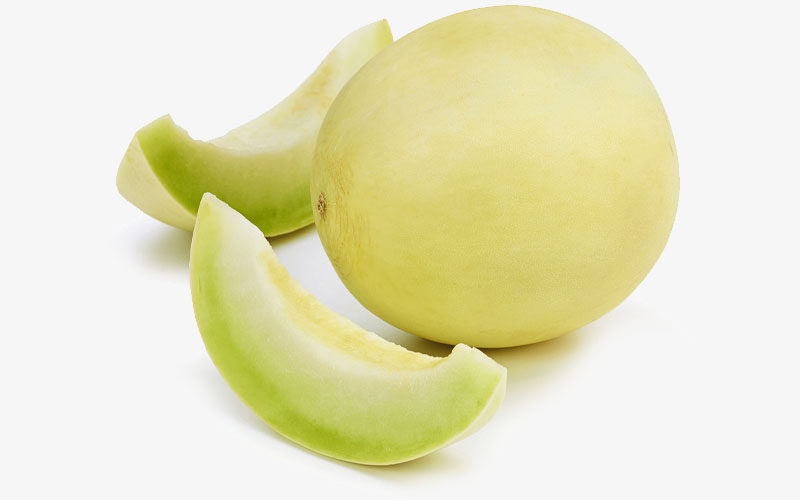 Which is the sweetest melon among all the melons?

Ripe honeydew melons are considered the sweetest of all the melons. They are characterized by pale green flesh and a sweet-smelling aroma.

This melon resembles very closely with honeydew melon with the same shape and size but tastes differently. It tastes more like a cucumber instead of being sweet like honeydew.

These are elongated melons with extremely juicy and sweet flesh. When ripe, their color turns light green. These melons are cholesterol and fat-free with a higher quantity of vitamin A and C.

Melons have been the center of attention in vertical farming methods because it produces much more than what we get in traditional farming. 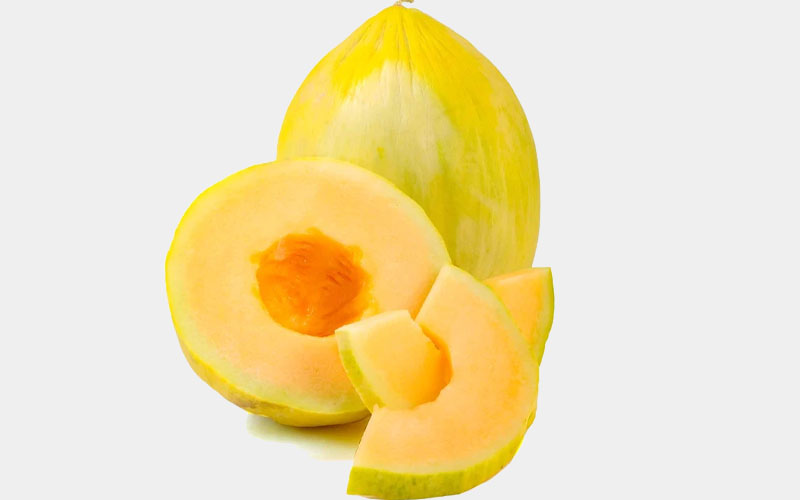 Crenshaw melon is a hybrid variety of melon obtained by crossing a Persian and casaba melon. It’s also called the Cadillac of all the melons.

What are yellow melons called?

The yellow melons are called Canary melons, which are oval-shaped with a smooth rind that turns bright yellow when ripe.

Like other melons, canary melons are also low-fat, low-calorie fruit, having high vitamin A and fiber content. 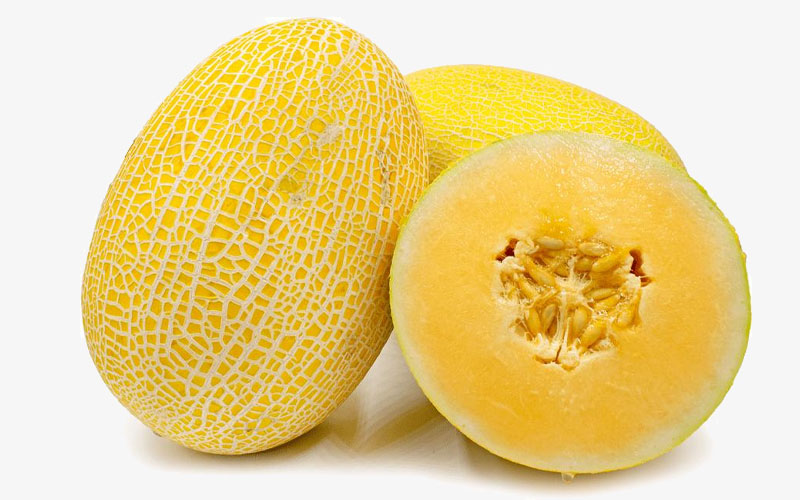 This melon is originally from a city in China, known as Hami. Like other melons, Hami melon is low in calories as well (just 34 calories in 100g).

It’s one of the expensive melons that originated in Japan. The size and weight are relatively small, just 4-5 inches in diameter, and a one-pound weight on average.

They are categorized among small melons.

Japan offers some of the world’s most expensive melons. In 2019, a pair of Yubari King melons were sold at $45000 in Hokkaido city.

It’s the melon that’s famous in East Asian countries, including Korea. It is rich in potassium and low in sodium that’s good for cardiovascular diseases and hypertension. 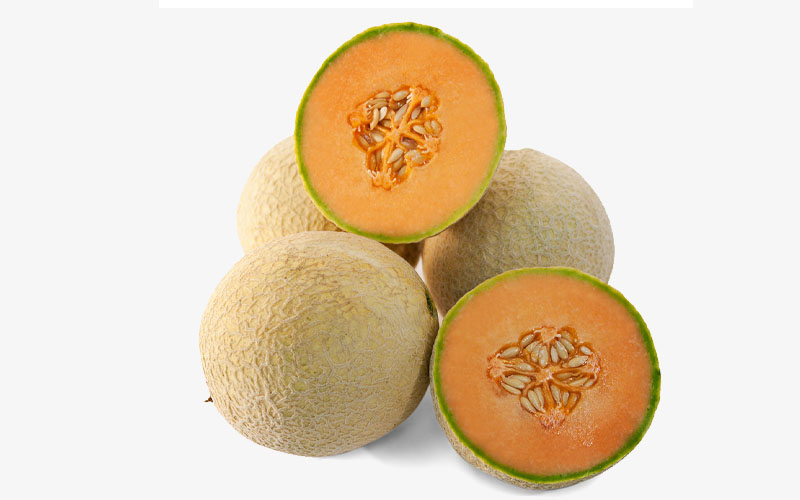 Sugar kiss melon is named so because of its super sweetness that melts in the mouth. It can be added to smoothies, fruit salads, or eaten raw. 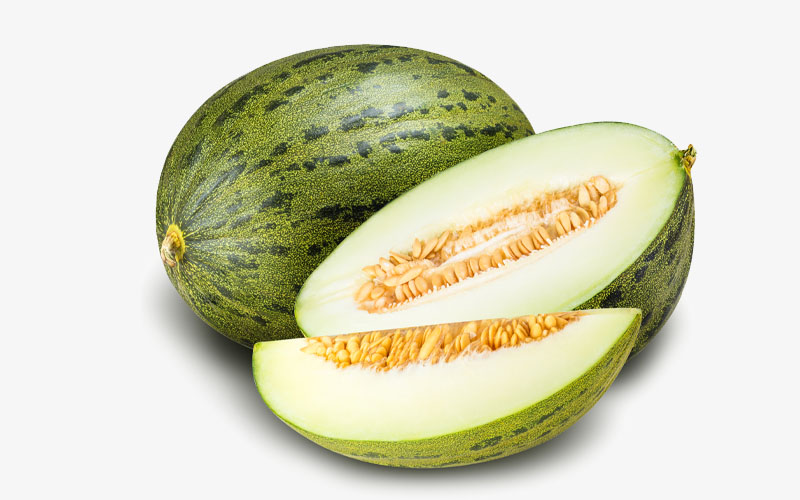 This melon has been named so because of its extended shelf-life. The dimensions are exactly what Crenshaw melon has, but the color is green, and the flesh is the same as a honeydew melon.

Now you have got a good understanding of all the melons that we commonly know and eat like fruits; it’s time we learn about melons that are used as vegetables.

In short, the genus Momordica has all species that originate from the melon family, Cucurbitaceae but are tubular, do not taste sweet, and are part of cuisines rather than eaten raw.

So, let’s take an overview of these melon varieties. 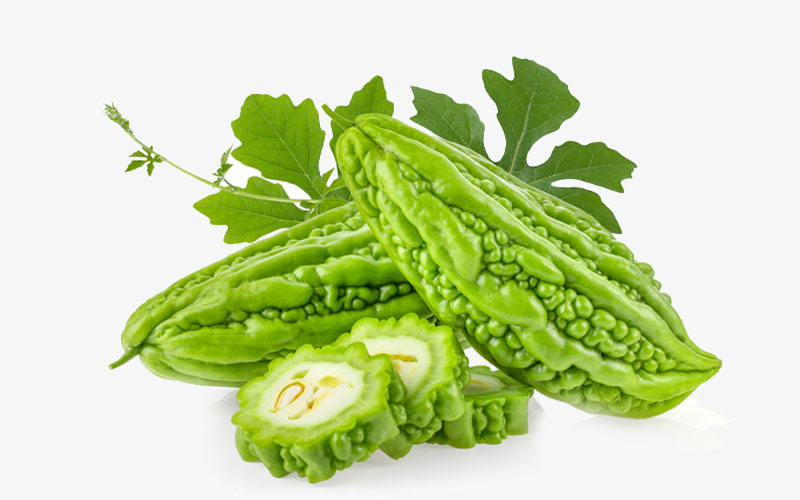 This melon is totally opposite from the melons discussed above. It’s the bitterest melon that undergoes a bitterness-removal process before cooked, let alone eating it raw.

Instead of having a big round or oval-shaped, it’s small elongated with a tough rind. 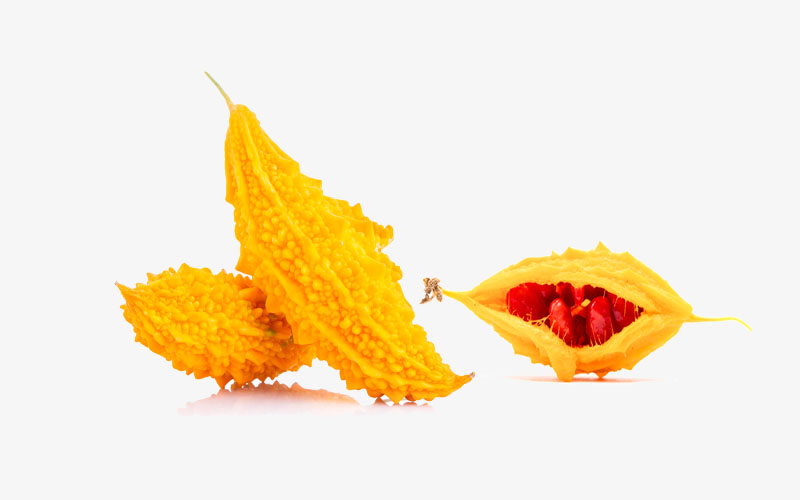 This is another melon similar to bitter gourd but lesser in bitterness. Its shape can be defined as a small but fat bitter gourd. It has big red seeds that, according to some, are poisonous.

The young fruits and leaves of Momordica balsamina are cooked in certain African countries.

5 Tips for Picking the Right Melon

Picking the right melon is always a challenge. Sometimes a quick pick proves to be a success, and sometimes an assiduous search even gets an unripe or overripe one.

But a few tips may help you choose the perfect one. Let’s get to know what they are.

Melons are great to have as snacks, fruit salad, and whatnot. All muskmelons are extremely sweet that differ slightly in sweetness, rind type, and shape.

There are a few melons like a bitter melon, which are quite the opposite of the ordinary melons we eat as fruits. But all of them belong to the same family known as Cucurbitaceae.

Which of these melons are common in your region? and which one do you like the most? Let us know in the comment section below.