Often, there are some words, that we don’t get an idea of like the name of a rare or unseen plant, a new dog breed, or some food cuisine.

When first heard about Tobiko, the thought came to mind that it maybe is some cartoon character’s name. LOL! But it isn’t. 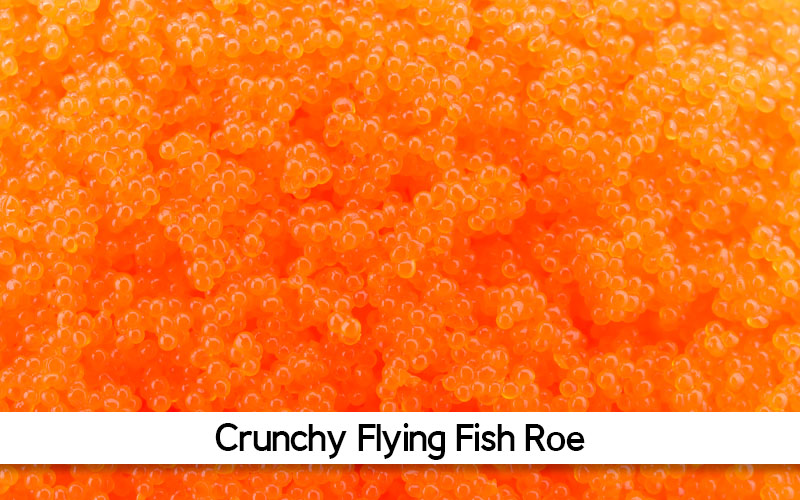 Tobiko is basically the Japanese word, used for roe flying fish. Roe or tobiko is used to create types of sushi.

Masago Vs Tobiko Vs Ikura.

You can say that tobiko is larger than capelin roe yet smaller than salmon roe.

Masago fish is small so it produces the smallest roe of all, while tobiko is larger than Masago yet smaller than Ikura.

As far as colors are concerned, Tobiko and Masago both have orange-red color.

However, Masago color is not as bright as that of tobiko. Besides this, ikura is roe from salmon fishes hence it has specific intense reddish-orange pigment.

The taste also differs: Ikura and tobiko have a crunch while masago is sandier in texture. 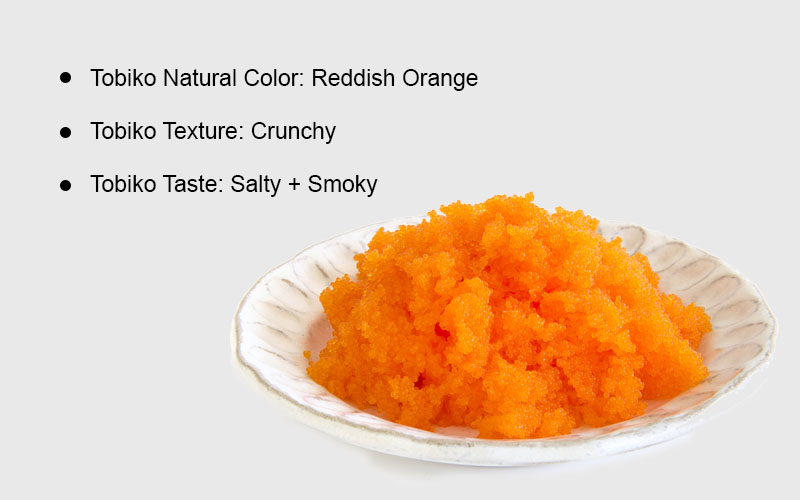 To identify tobiko, first of all you can check for its size that’s mentioned above.

You can take help from its color, texture, and of course, taste:

Apart from orange-red, tobiko is used in other colors as well based on the food preferences – that’s dyed tobiko. 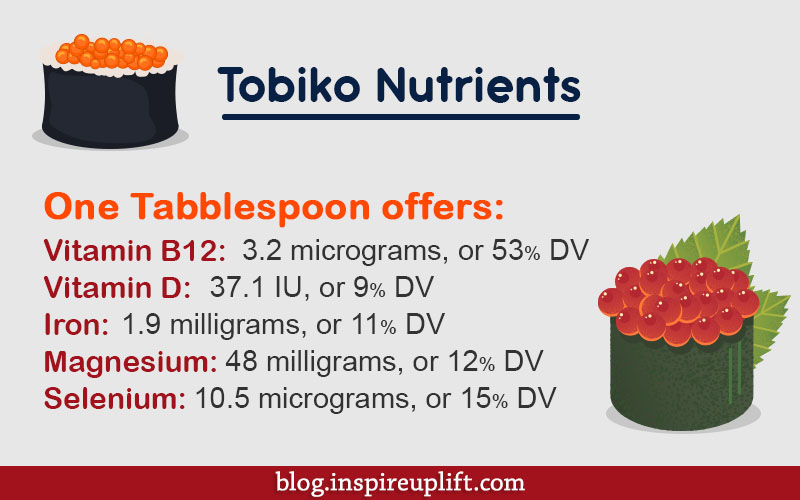 Seafood is always rich in proteins yet lower in calories. Here, though, in terms of nutrients, tobiko doesn’t disappoint you as it has a heavy amount of 40 % calories in it.

All with this, it contains 6 percent folate, 11 percent phosphorus, and 16% selenium. 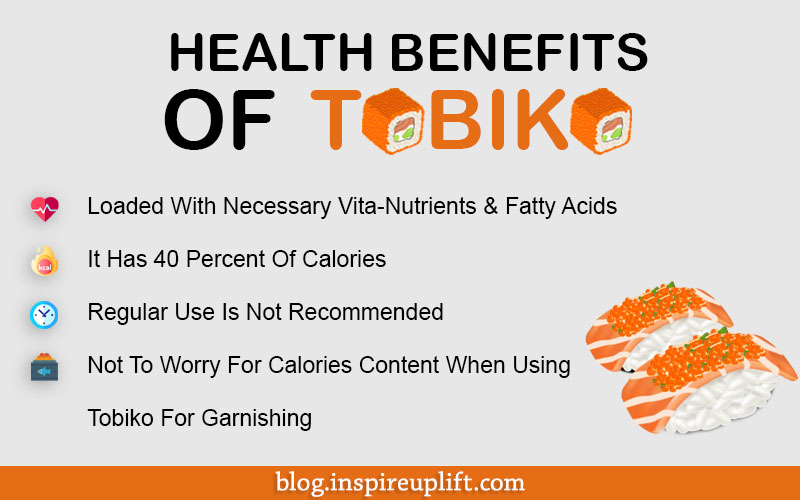 As you have seen, tobiko is loaded with necessary vita-nutrients and fatty acids.

However, you have also seen that it has 40 percent of calories.

Therefore, its regular use is not recommended due to high cholesterol content.

All with this, you don’t need to worry about calorie content when using Tobiko as a garnish.

Tobiko is used for?

Tobiko is flying fish roe (eggs), it is a delicate topping of Japanese cuisines. It is enjoyed as:

Is tobiko Safe to Eat?

It is mostly consumed in very small quantity as topping, garnishing, and filling.

Hence, this moderation makes it safe to eat.

Now, you know everything about this amazing seafood topping, it is time to do some cooking and making a dish to enjoy boring quarantine.

Note: “Whenever cooking, ensure to make your kitchen fireproof, by installing a fire extinguisher or emergency fire blanket in there.” 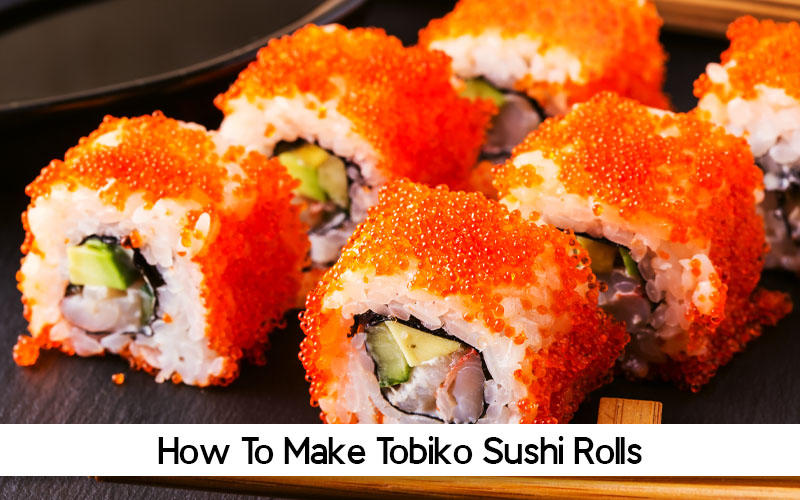 Note: for best cooking experience, make sure you have all the tools and gears for cooking.

For more, check this video.

It can be a perfect morning recipe that requires only 5 minutes if you prepare the ingredients at night and store them in  Airtight bags to preserve their nutrients.

A chopper set to chop veggies easily, one bowl to stir the ingredients together, heated stove, a plate to get the done omelet 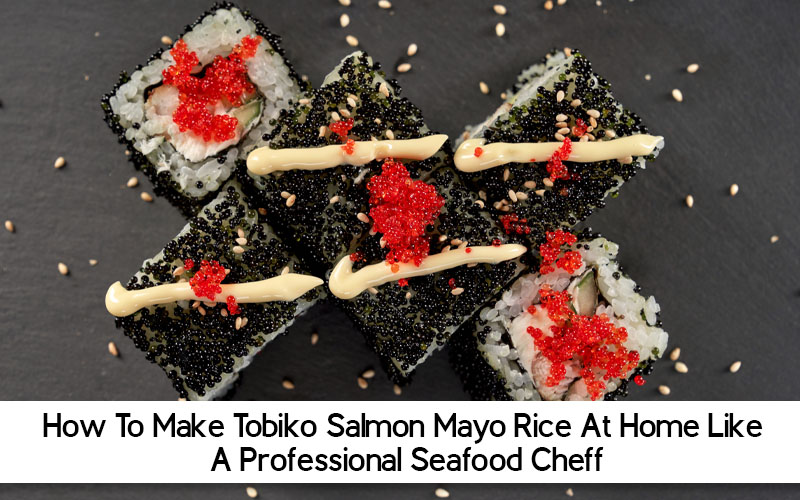 Third recipe for today that you can make using tobiko roe at hone is Salmon Mayo Rice edged with flying fish roe.

Tobiko, as it is a famous roe used in Japanese cuisines mostly, you can easily buy tobiko at:

Well, not all of us have tried every food and most of us go to different restaurants to try out new things.

So, when you go for tobiko brunching at a hotel, the chefs use Smelt roes (masago) instead of Tobiko, to cut the cost, as the former is cheaper.

For this, whenever you are dining out, try to order Wasabi tobiko, because that’s available in its original form.

This is all you need to know about Tobiko. Are we missing something? Let us know in the comment section below.

Also, do not forget to share your favorite tobiko recipe with us.

We will be coming with more fun blogs on food, till then;

Have a tasty day!