“Blood is thicker than water” – you must have heard it quite a lot.

From the behavioral science aspect, it holds its weight. But does ‘the thicker, the better’ hold true from a health perspective too?

In fact, thick blood or clots hinder the smooth flow of your blood in the body, which is fatal.

Although there are uncountable drugs for blood thinning like Aspirin and Heparin.

But today we’ll discuss absolutely natural ways by which you can thin your blood.

So, let’s discuss this.

Too thick or too thin blood, both are dangerous. Thick blood can form clots, whereas thin can cause easy bruising and bleeding.

Red blood cells are a key factor in creating clots because they are the highest in number.

Another factor is the presence of Low-density lipoproteins (LDL) in the blood. The more the LDLs in blood, the thicker the blood.

Another reason is the chronic inflammation that increases the viscosity of the blood.

Summarizing the causes of thick blood, we can say it’s because of:

Blood thickening can cause strokes, heart attacks, and issues of kidney. 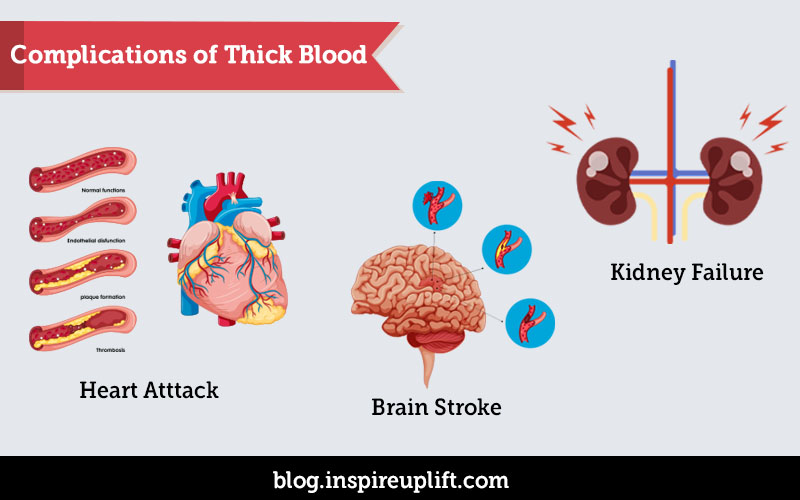 Do You Know: A study by the Doctors at Emory University concluded that the thickness of blood might be correlated with inflammation in COVID-19 patients

6 Ways To Thin Your Blood Naturally 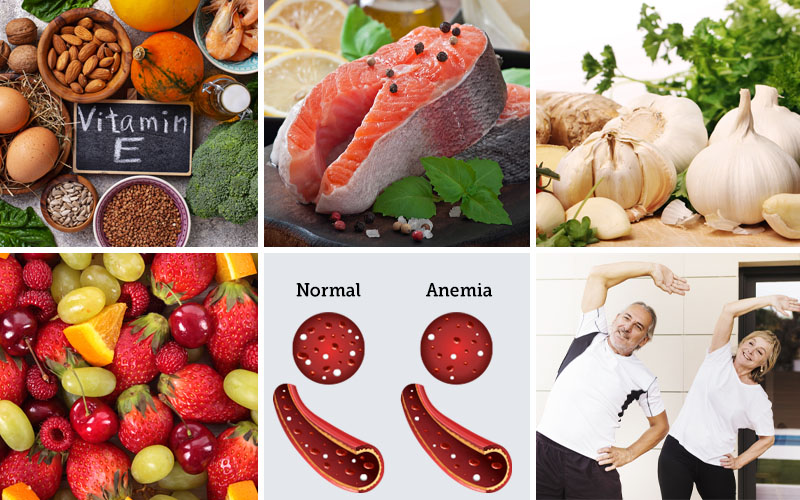 Excessive blood clotting is extremely dangerous. In fact, 100,000 people die each year because of blood clots.

Here, it’s pertinent to mention that vitamin K does the opposite work, that is, thickens the blood. So, if you’re on a medicine that is meant to thin your blood, you must be very cautious while taking vitamin-K rich foods.

So, what are the natural ways which can help make our blood thin, other than over the counter blood thinners? 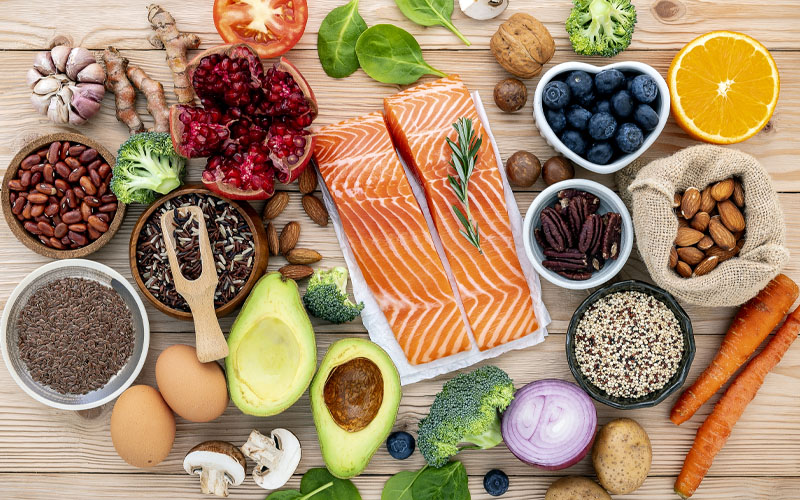 Vitamin E is a fat-soluble vitamin that’s a group of eight compounds, including tocopherols and four tocotrienols. Vitamin E is one of the most natural blood thinners.

Other Functions of Vitamin E

Foods that have vitamin E

How much should vitamin E be taken?

The Food and Nutrition Board at the Institute of Medicine recommends that for the children at the age of 9-13 years, its 11mg/day, whereas for adults, it’s 15mg/day. 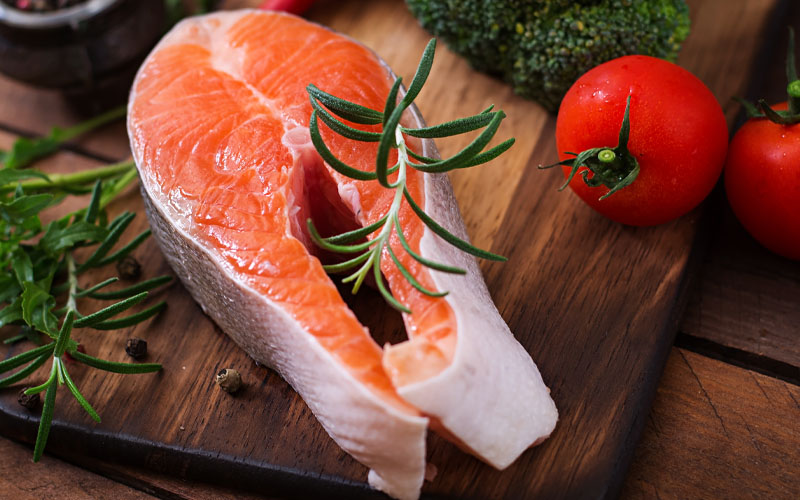 A research in Poland discovered that omega-3 fatty acid courses, when combined with two blood-thinning drugs, clopidogrel, and aspirin, changed the process of blood clotting.

Omega-3 sources have anti-thrombotic and anti-platelet properties, which, when added with other factors, increase the clot destruction time by 14.3%.

When used in combination with blood-thinning drugs, it produces less thrombin, which is a clotting factor, according to the experts.

Foods that have Omega-3 acids

ALA is found in plant oils, whereas DHA and EPA are found in fish and seafood.

How much Omega-3 to Take?

Experts do not recommend any specific quantity of omega-3 fatty acids, except for ALA, for which the daily amount for men is 1.6 g, and for women is 1.1g.

Include fish like salmon, tuna sardines, nuts, plant oils, and fortified foods in your daily diet. 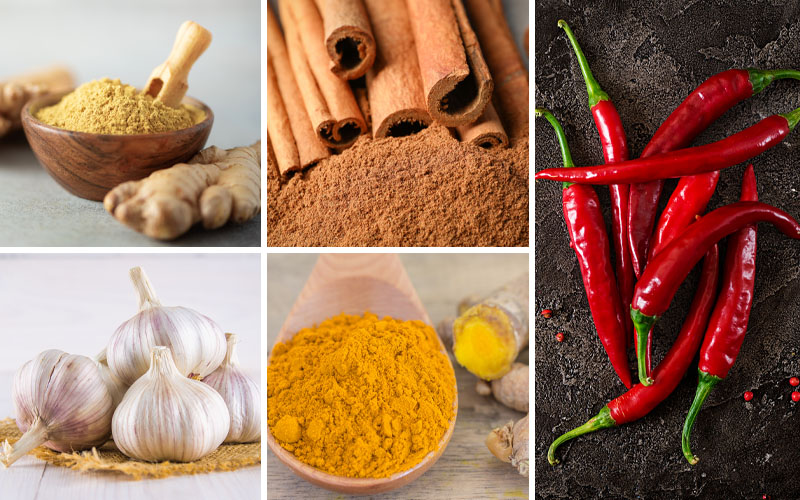 Salicylates are the substance that is richly present in most of the commonly used spices.

They have the tendency to block vitamin K, as proved by a number of researches.

Let’s take an overview of the spices that are rich in salicylates. 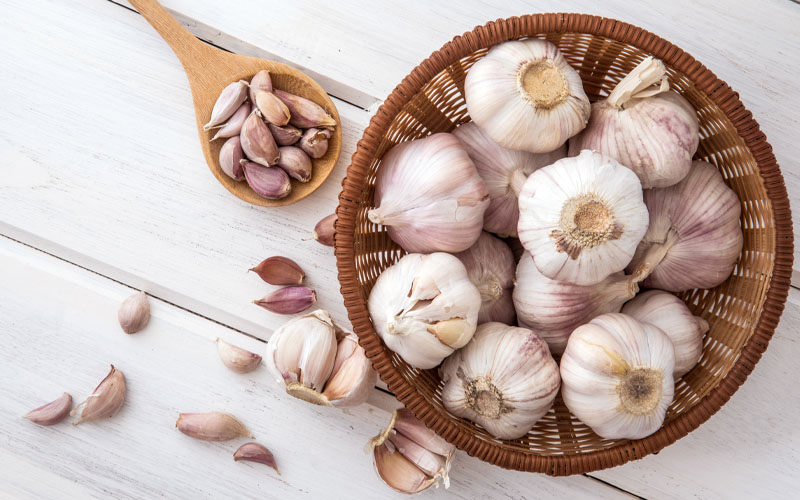 Garlic is the most common home ingredient for most of our recipes. The compounds in the garlic, such as Allicin, Methyl Allyl, etc. is said to have anti-thrombotic effects.

How does garlic act as a Blood thinner?

Garlic impacts both Fibrin and platelets, both of which are an integral part of blood clotting.

Also, garlic and onions have natural antibiotics that can kill the intestinal bacteria that produce vitamin K.

How much Garlic to Take?

One garlic clove twice or thrice a day is more than enough to get its amazing benefits.

How to Use Garlic?

It can both be taken as raw or cooked.

In raw form, it can be used a topping in certain dishes, whereas in cooking, you may press it and use it with other ingredients in your dish. 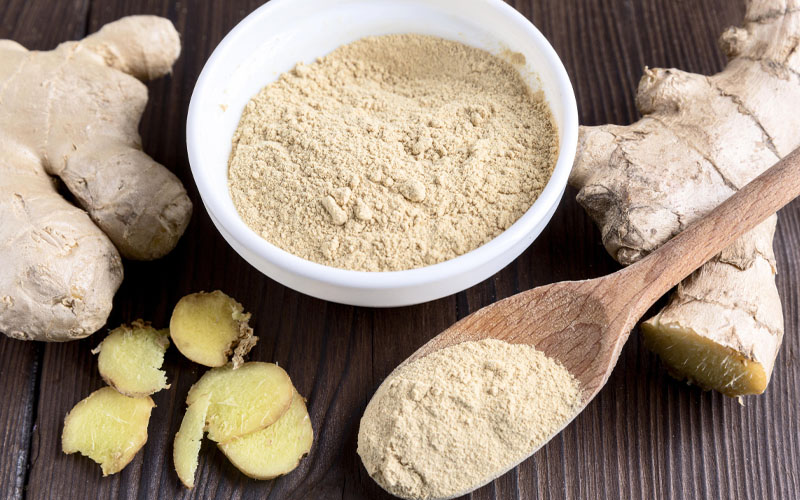 Ginger is another spice that you might have known as an anti-inflammatory hitherto. But it’s one of the natural ways to prevent blood-clotting.

How does ginger act as a Blood thinner?

Ginger has a natural acid called salicylate: one of the core ingredients of aspirin tablets. That’s the reason doctors, most of the time, recommend aspirin as a blood thinner.

How much garlic to Take?

How to Use Ginger?

Both fresh rhizomes and dried ones have enough of salicylates to work as an anticoagulant.

Do You Know: According to a study, organic foods have a higher content of salicylates than in conventional foods. 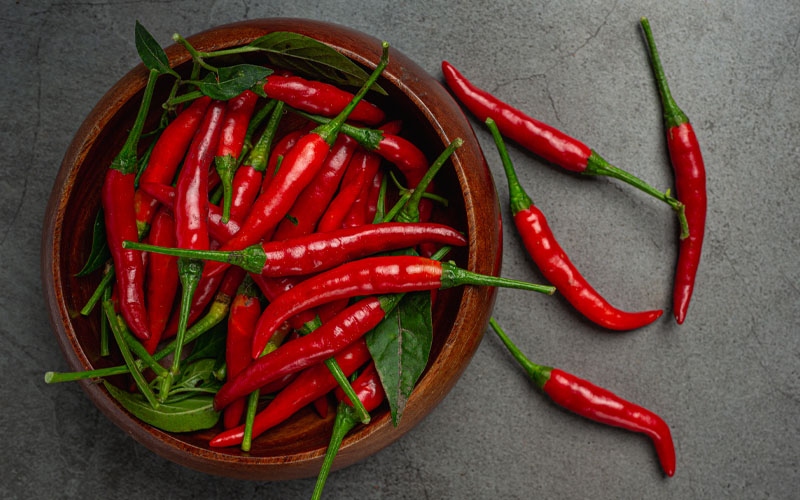 It may sound strange, but yes, cayenne peppers do play a role in thinning our blood. Cayenne pepper is one of the hottest peppers available today.

It’s thin, long, bit curved from the tip side, and tends to hang from the stem rather than growing upright.

Its heat is measured between 30k to 50k Scoville Heat Units (SHU).

How cayenne pepper acts as a blood thinner?

Again like ginger, the ability of cayenne pepper or its substitutes to work as a blood thinner owes to the presence of salicylates in it.

How much cayenne pepper to Take?

There is no such medically prescribed dosage of cayenne pepper available. However, as per most trusted manufacturers, a daily intake between 30mg and 120 mg a day is just fine.

How to Use Cayenne Pepper?

Cooked in your favorite dish is just fine and perhaps the only option because you can’t take it orally.

Do you know: Although hotter in taste, cayenne pepper can stop bleeding from sharp cuts in seconds 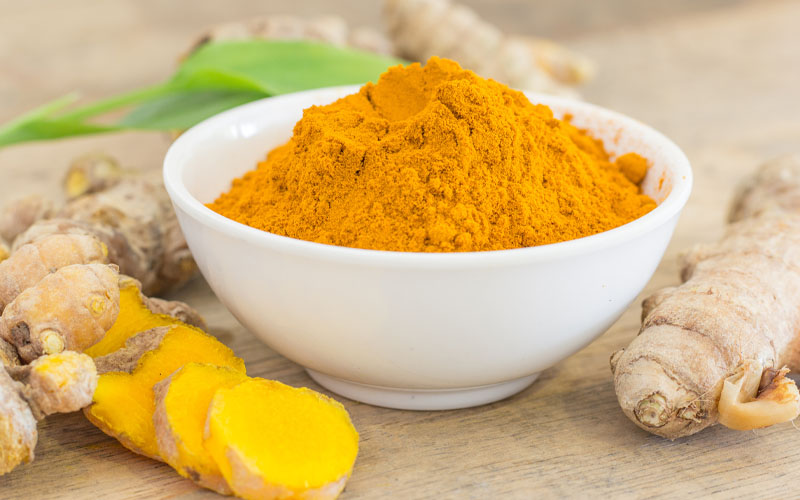 Turmeric is a famous spice worldwide that’ famous for its rhizomes.

It’s used both as fresh and boil-dried. Besides adding a unique golden color to the food, it increases its medicinal value as well.

How does turmeric act as a Blood thinner?

Curcumin is the ingredient in turmeric that has a natural blood-thinning property.

How much to Take?

Curcumin in turmeric is fat-soluble. So, taking it with some fatty meal is advisable. In other words, use it in your recipes that require cooking.

Salicylates Works Through The Skin AS Well

Salicylates also work equally well if it’s rubbed on the skin. A 17-year-old high school track star died because of the overuse of a cream that had salicylates in it. 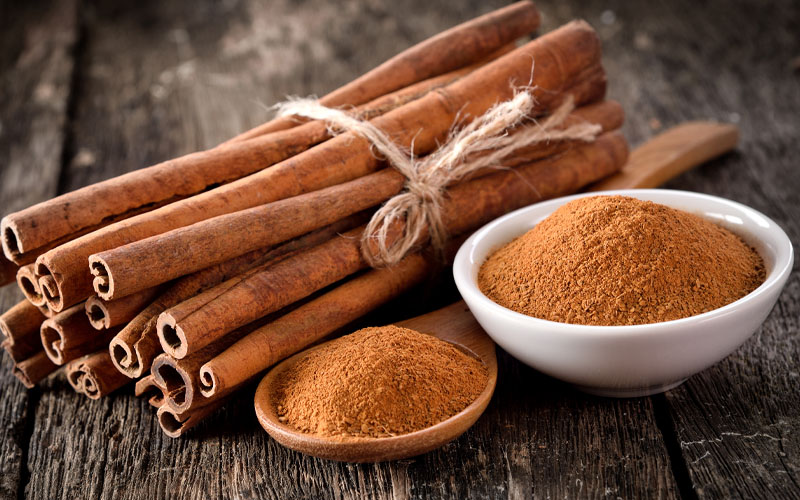 Cinnamon is another spice that’s rich in salicylates.

It’s obtained from the inner bark of the trees that fall under the Cinnamomum genus. The taste is both spicy and sweet.

How does cinnamon act as a Blood thinner?

Cinnamon is one of those spices that are rich in salicylates, which is the key factor in thinning the blood.

How much cinnamon to Take?

AS with other spices, there’s no specific dosage of cinnamon. Some recommend 2-4 grams of its powder a day. But avoid high dosages that may become toxic.

How to use cinnamon?

Being a spice, it can’t be taken alone orally. It’s better to use it in your daily cooked recipes, like curries.

Other spices that have plenty of salicylates include Dill, Thyme, Oregano, curry powder, etc. In other words, almost all the spices that are part and parcel of Indian cuisines are rich in salicylates. 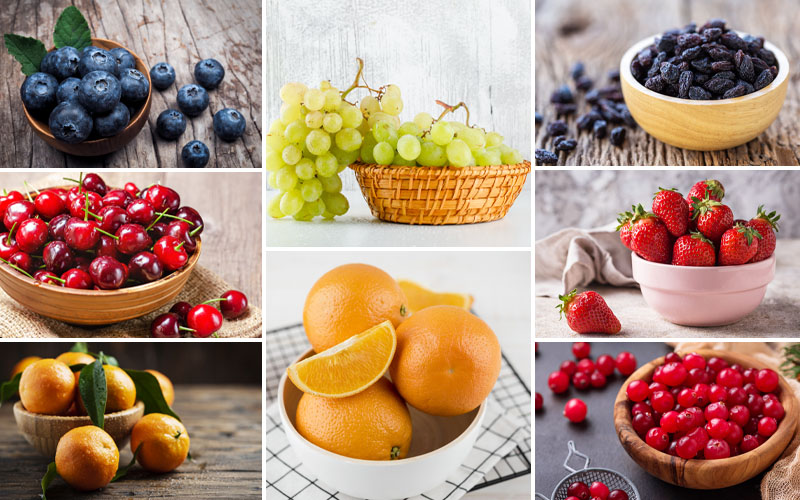 The following are a few of the blood-thinning fruits.


Tip#1: Always wash the fruits by submerging them in water for a few seconds 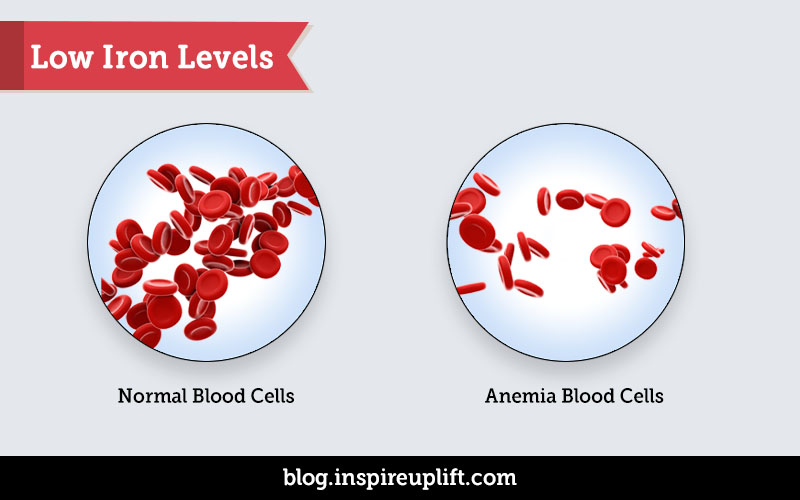 People with low iron levels have a higher risk of dangerous blood clots. So, keep your iron level high. 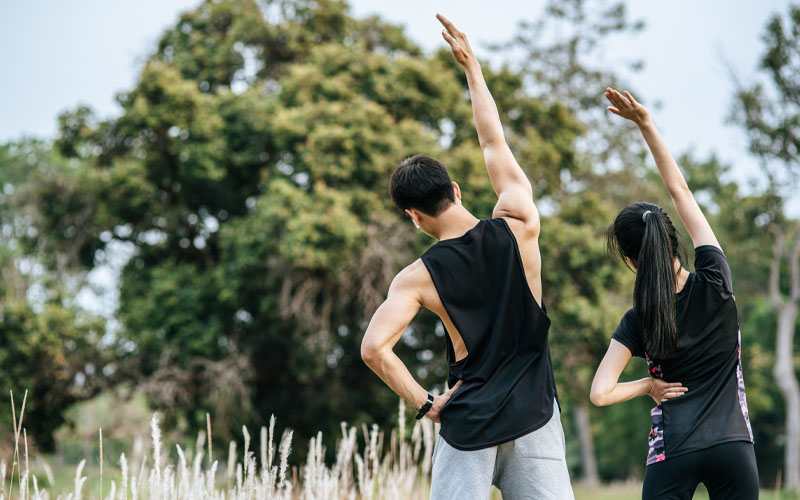 Exercise helps you control your weight, which otherwise causes multiple diseases if it increases to a certain level.

Using a fat burning massager is one of the ways of losing your excess fats.

During the studies conducted on female athletes, it was concluded that vigorous exercise lowers the amount of vitamin K.

That is why people who travel a lot for long hours or stay in bed are more prone to blood clots’ formation.

In other words, the more you remain stationary, the more the risks of blood clotting.

Blood thickening medicines are many, but to do it naturally is the best way always. There are three categories of food that can thin your blood. It includes Vitamin E rich foods, Omega-3 fatty acid sources, spices, and fruits rich in salicylate.

On the other hand, vitamin K rich foods are the foods that thicken the blood.

How conscious are you about blood thickening? Seeing the benefits of natural blood thinners above, are you planning to mold your diet plan according to this? Let us know in the comments section below.

The above information has been curated after thorough research from the authentic sources. However, it cannot be taken as an alternative to your health care provider’s professional advice.