If you are in South Africa, just search for ‘African food near me,’ and

Malva Pudding is sure to come.

In fact, it’s one of the most popular desserts made in South Africa.

So, without delay, let’s get to know about it.

Maggie, the South African legend, is the person who invented this amazing dessert, Malva pudding, almost 50 years ago.

Since then, it’s among the topmost dessert options in any restaurant’s menu. 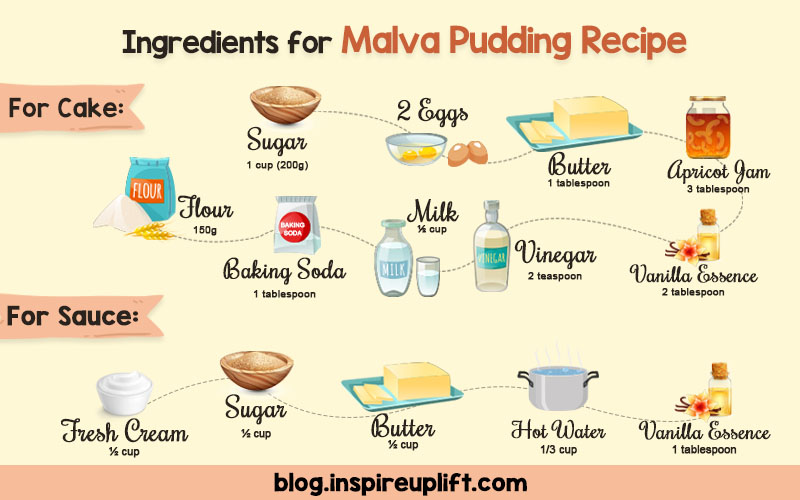 Let’s start with the cake first

Add the flour, sugar, and baking soda into a bowl – in other words, mix all the dry ingredients of the cake.

Now to the above mixture, add the milk, two eggs, vanilla essence, melted butter, and the white vinegar.

Here, you may wonder why vinegar is added, but here is the answer.

The reason we add vinegar is that vinegar is an acid, which, when mixed with baking soda, reacts and produces carbon dioxide, which helps the cake to get that spongy, soft, and marshmallow-type mouthfeel that we love.

A point to be noted: while you mix the ingredients turn on your oven and set to 180°F so that by the time you prepare the mixture, the oven is well hot and ready to bake.

Mix it well with some mixer for 5 minutes or until you see it well mixed. A Mixer Splatter Guard Cover is helpful here, which won’t let the mixture spill out from the container.

Now you have that cake batter ready, pour it into a cake pan.

A DIY cake shaper is the best thing to use here as a cake pan because it allows you to shape your Malva pudding as per your desire. Like heart-shaped, the first letter of your name, etc

Or, if you want to make separate muffins or cupcakes, a batter dispenser is desirable.

While the cake bakes, you can make the sauce.

After you are done with the cake, it’s time you make the delicious sauce that can be poured on the top.

Melt half a cup butter you have for this in a saucepan, and then add a half cup sugar.

Then add the half cup fresh cream and a tablespoon of vanilla essence. Stir it well while still being heated at a medium flame.

Once it starts to boil, add half a cup of water and let it boil again for a while, and that’s it.

The cake must be ready by now. Take it out from the oven and pour this sauce over it. Make sure you add a thick layer over the cake that hides its surface.

The malva pudding is ready to be served.

How to Serve Malva Pudding?

While you serve it, don’t forget to add a scoop of fresh cream in the bowl beside the slice.

How healthy is Malva Pudding?